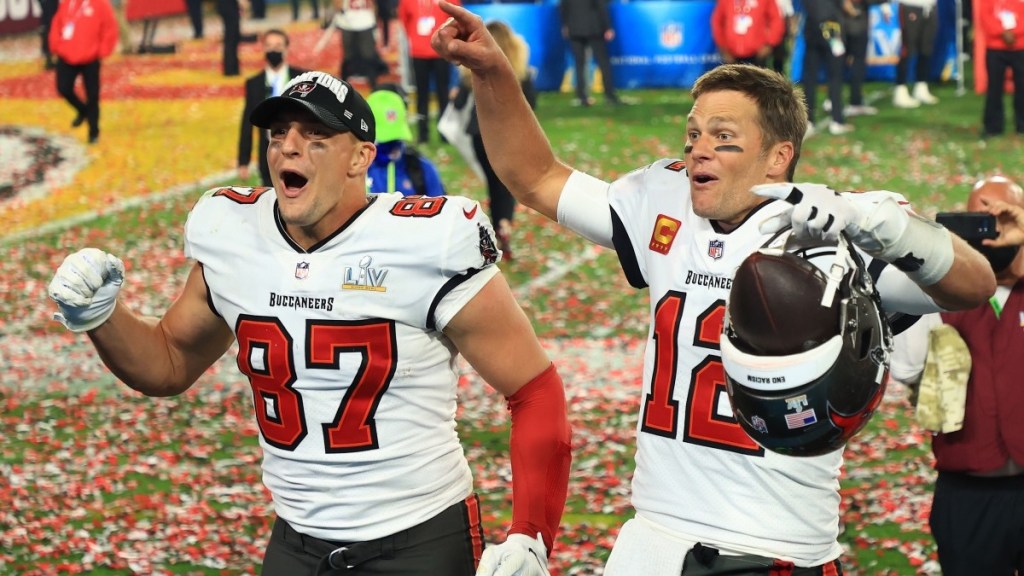 Tom Brady and the Tampa Bay Buccaneers begin their 2022 NFL season on Sunday Night Football against the Dallas Cowboys. And they will do so without their former tight end and future Hall of Famer Rob Gronkowski.

Gronk played his entire career with Tom Brady and they were arguably the most prolific QB-TE duo in NFL history, winning 4 Super Bowls together. When the biggest of games were on the line, Brady knew he could rely on Gronk in those moments and he’ll now have to adjust to life without his favorite target.

The Let’s Go! podcast with Tom Brady, Larry Fitzgerald, and Jim Gray came back this week with a 2-episode premiere on September 5th. In the ‘New Challenges’ episode, Tom Brady tells sportscaster Jim Gray what he expects from the tight end position now that Rob Gronkowski is no longer with the Tampa Bay Buccaneers.

Tom Brady discusses what he expects from the Tight-End position now that Rob Gronkowski, ‘one of the all-time greats’, is retired.

Tom Brady: “You’re missing someone that was one of the all-time greats, which is, you know, you can’t replace that. And we all love him, but we miss him and he just decides not to play.”

So he’s retired, so we’ve had to, you know, move on to try to, you know, solve some things without him. And, you know, we’ve done a good job. Cam Brate‘s taken on a big role. Kyle Rudolph, we’ve got. We drafted a few young players. So that position, although it’s different without Gronk, you know, we’re gonna have to go out there and earn it, and earn the respect of everyone by our work, and by our performance.”

“So I’m excited to see what we can do. And, you know, I’m never one to make a bunch of predictions, other than, you know, we’re gonna work hard to get it right. And it’s not gonna be perfect all the time. It’s got to be perfect enough to win.”

New episodes hit the feed TODAY at 6:00 ET. Or listen:

As pointed out on PFT, Rob Gronkowski could theoretically return to the Tampa Bay Buccaneers and Tom Brady at any time. The Bucs would welcome him back with open arms once the season began. He’s a free agent and could go anywhere if he un-retired but realistically, he’d only come out of retirement to play with Brady again.

Tom Brady will have PLENTY of tight end targets this season. The Buccaneers have Cameron Brate, Kyle Rudolph, Cade Otton, and Ko Kieft listed on their depth chart (in that order).

Cameron Brate has been with the Bucs since 2014 and has caught passes from Tom Brady since his arrival. He has 33 career TDs with Tampa Bay.

Fellow veteran Kyle Rudolph played 10 seasons wiht the Minnesota Vikings and 1 with the New York Giants before joining Brady and the Bucs. He has 49 career touchdowns and put up 840 yards in the 2016 season. So Brady’s got some great options.