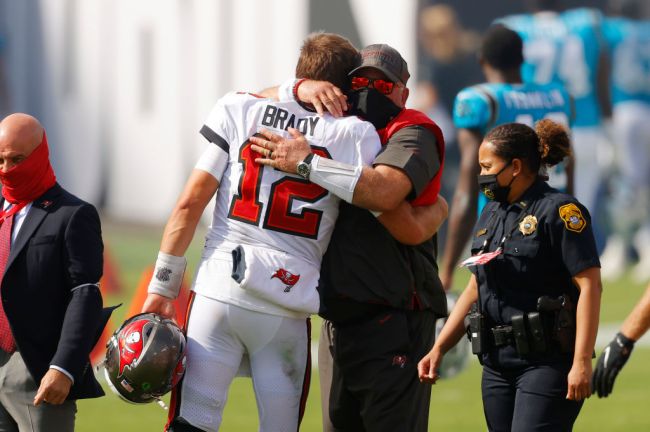 The tension between Tampa Bay Buccaneers quarterback Tom Brady and head coach Bruce Arians changes with each week, usually depending on a win or loss on any given Sunday.

The duo appears to be getting along – for now – but planned to get together during the Buccaneers’ bye week until the NFL dropped the hammer on those plans.

Despite all the public discussion about their relationship, the wondering about whether or not they get along, how the quarterback handles being called out by the coach, Arians and Brady clearly like each other enough to anticipate two or three days of bonding over golf at Tampa’s Old Memorial Golf Club, one of the state’s best.

That was the thought, with the two of them scheduling 36 or 54 holes.

The only problem was that the league stepped in and nixed the idea, a source said.

Gathering outside the facility is not allowed in the COVID-19 protocols.

And so, golf was out, but self-scout was in.

Here’s my question – how did the NFL know about the golf plans? Do players and coaches have to tell the league how they’re spending their days off?

Gathering outside the facility isn’t allowed but what if Brady or Arians wanted to play golf with three friends who have no affiliation to the NFL? Is that allowed?

Brady instead spent the week going over tapes from the previous weeks, specifically his interceptions, which sounds like much less fun than golf.

Arians is probably better off he didn’t hit the links with Brady. God forbid Arians managed to beat Brady, the quarterback would hold the grudge forever.