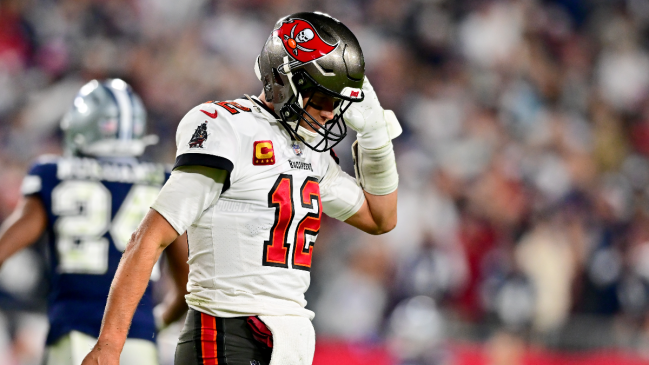 Tom Brady appears to be in a bit of a cantankerous mood this week, at least based on the most recent episode of his Let’s Go! podcast.

Not only did Brady appear to get frustrated by a question about his future while on his own podcast, but he also took a swipe at the NFLPA for not protecting him after the league fined him for his attempted sliding tackle play on Malik Hooker in the NFC Wild Card game against the Cowboys.

“I’m a little disappointed, though, because I tried to tackle [Hooker] with my right shoulder and missed him,” Brady during the most recent episode of his Let’s Go! podcast.

“And I wasn’t going to try to stick my arm out, so I was trying to get him on the ground. I missed him completely. I didn’t even hit him. I tried to trip him but I didn’t. So, I don’t know how you can get fined for something that didn’t even happen. Are they fining an intention? It’s like targeting and you miss the person you hit, and they still call it targeting. So, I got to figure out and understand why this is the case. This is why I wish our NFLPA was stronger.”

Tom Brady was fined $16,444, according to @RapSheet, for trying to trip Cowboys safety Malik Hooker on Monday nightpic.twitter.com/GiQHEXxhMc

Brady’s comments, mind you, come after he was fined $16,444 after he apparently tried to trip Cowboys defensive back Malik Hooker after a third-quarter fumble recovery during the NFC Wild Card game a few weeks ago. Maybe those losses from the FTX conspiracy were worse than we thought.

At this time, while Brady’s plans for next season have yet to be confirmed, all signs point to him, at the very least, no longer playing in Tampa Bay, as the team is clearly in need of a rebuild following a disappointing 2022 season that saw them not only go 8-9, but look like a quickly aging team in the process.