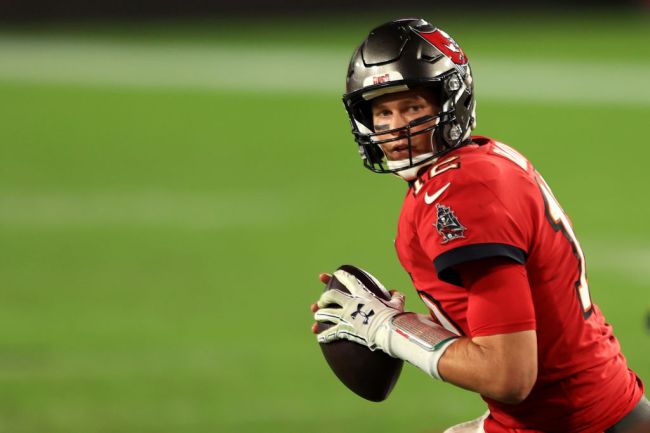 Over the years the NFL has made a concerted effort to protect quarterbacks and wide receivers from taking hard hits but Tom Brady doesn’t agree with the rules put in place that over penalize defenses for just playing football.

During a recent interview, Brady spoke about why he feels the NFL over penalizing defensive players for offensive mistakes is bad for the league.

@TomBrady was spittin all the facts! pic.twitter.com/WKJBLgAQYz

“A quarterback should only throw the ball to certain places because your receiver is in danger of getting hit. When I used to play against Ray Lews I wouldn’t throw the ball to the middle of the field because he would hit them and knock them out of the game and now every hard hit is a penalty on the defense. So I feel like they penalize defensive players for offensive mistakes.

Brady went on to give an example that happened just a few weeks ago during a preseason game when Justin Fields got crushed and the defensive player was penalized on the play.

Andre Smith just destroyed Justin Fields. Wow. (Fields got up after and is fine.) pic.twitter.com/TsG4NGPpQe

“So if a quarterback messes up and doesn’t see the blitzer or the line screws up and the defensive player hits him hard they throw a flag on the defense. So they’ve almost moved the protection of your opponent to you as opposed to where it should be which is on yourself. If you’re a quarterback you have to protect yourself and your players, it shouldn’t be the responsibility of your opponent to protect you. It creates really bad habits for players because you feel like I can basically do anything, I can run and not slide, I can throw to my receiver in any coverage and not have any repercussions for it. The only thing they’re going to do is blame the defensive player for it.”

Fans agreed with Tom Brady’s assessment of the NFL’s stance on penalizing defenses for offensive mistakes.

Tom Brady could not be more right. Unfortunately it will be in one ear, out the other with the @nfl. https://t.co/gQQgFSEu0H

Put Brady in charge of the rules committee https://t.co/Kvu9J9mF4p

This might be the first time every #Steelers fan applauds Tom Brady https://t.co/H0Zgq45Bqw