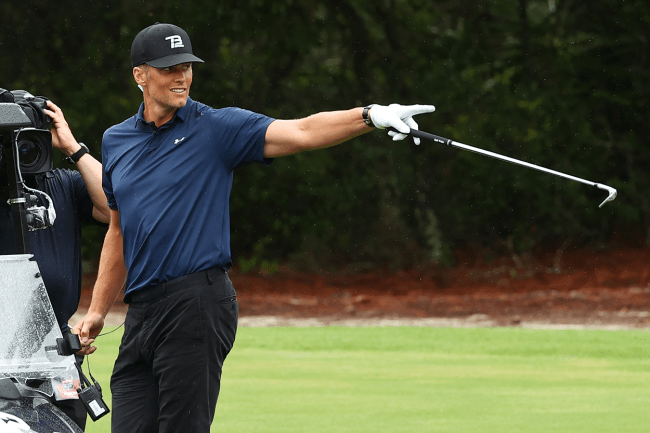 Tom Brady is a very good golfer. We know this. But is he this good?

As the greatest quarterback of all-time gears up for another edition of ‘The Match,’ he has been putting in work on the links. He has also been trash-talking everyone involved, meaning Aaron Rodgers, Patrick Mahomes and Josh Allen.

On Wednesday morning, Brady appeared to issue a warning to his on-course opponents. He put the world on notice with an incredible drone video from his day out on the course.

In the video, the camera man counts down Brady, who proceeds to swing his iron from a decent distance. As he watches his shot head toward the hole, and eventually in, the future NFL Hall of Famer loses his mind in celebration along with his crew.

From there, the video cuts to drone footage of the shot. It follows the ball right off of the fairway, into the air, onto the green and into the hole. It’s epic.

This is why you film every shot on the course…

While the video is truly insane, it may not be real. Brady has been exposed for using CGI in his viral videos in the past. That might also be the case here, though Brady claims otherwise.

After posting the video, a debate immediately began in the comment section.

The fakest ish I’ve ever seen

that is new golf shot tracer drone tech that hit abt 6 months ago.

I think I saw the foreplay guys try it out so if you are ‘famous’, it’s a very real possibility that you would be asked to do this.

& that was a legit beautiful swing

I have my doubts that this is real, but the way he followed through and looked at the shot throughout, it could be real

No shot this is real lmao

as real as playing catch with the JUGS machine. 🤔😏

Now, Brady’s reaction seems pretty genuine, and it can be seen in the close-up video as well as in the distance of the drone shot. He has also spoken out about the video since the debate began and says confidently that it is legit.

Tom Brady told us just now that this is a real shot, but he doesn't consider it a hole-in-one, because they put the ball in the middle of the fairway in a created tee box on a par four. Still calls it a "once in a lifetime shot." https://t.co/POQnufLR2q

However, as BroBible’s resident golf expert Mark Harris pointed out, the ball rolls mighty quick once it his the green. And according to a member at the club at which the video was filmed, you can’t even see the green from where Brady hit his shot, which makes things incredibly difficult. It could be fake and Brady could be lying.

If it really is real, like Brady says that it is, Allen and Mahomes need to be on high alert.