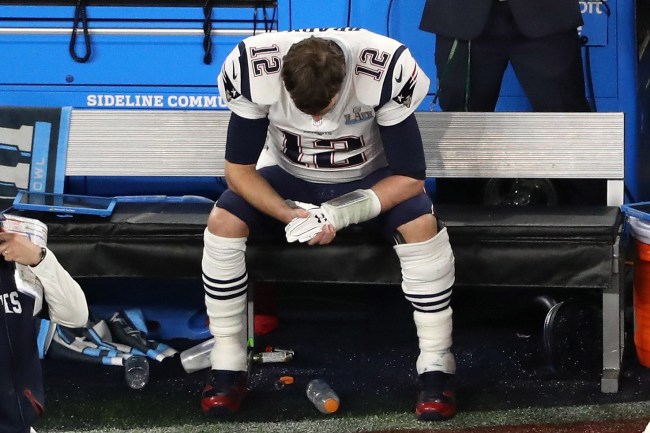 New England Patriots quarterback Tom Brady may or may not be the G.O.A.T. That kind of depends on each person’s individual opinion and allegiances.

What can’t be denied is the fact that for someone as great as Tom Brady is, he has, for some reason, had difficulty in the past getting his Patriots teammates to give him a celebratory high-five.

It’s really one of his most endearing qualities. That and his comical, giant, ever-growing coat.

After being denied a high-five for the second week in a row by teammates back in 2013, Brady told WEEI, “I know. Some of the guys showed me last night. I said ‘Where were all my guys?’ They were all running on the field. Jules [Julian Edelman] says, ‘Don’t worry. I’m gonna find you next time.’ I don’t know. It’s been all year. I can’t find anyone to get in there with me.”

On Monday, after Electronic Arts revealed the full list of player ratings for Madden NFL 20 (Get it here!), some rando on Twitter voiced his displeasure with Brady being the second highest rated quarterback, in particular the fact that as slow as Brady runs, he should be rated lower overall.

Someone must have alerted Brady to the complaint so he proceeded to dunk all over the fan and later posting a video asking EA to re-assess his speed rating.

“Submitting new evidence to be considered for my Madden NFL 20 speed rating. You can’t photoshop a video,” Brady tweeted.

Submitting new evidence to be considered for my @MaddenNFL speed rating. You can’t photoshop a video. pic.twitter.com/6h02i6oRqR

Pretty good. Especially for a guy who was given the lowest speed rating of any quarterback in the game.

This did not go unnoticed by the folks over at Madden who responded in the absolutely best way possible.

Poor Tommy, he just can’t seem to catch a break… or a high five.