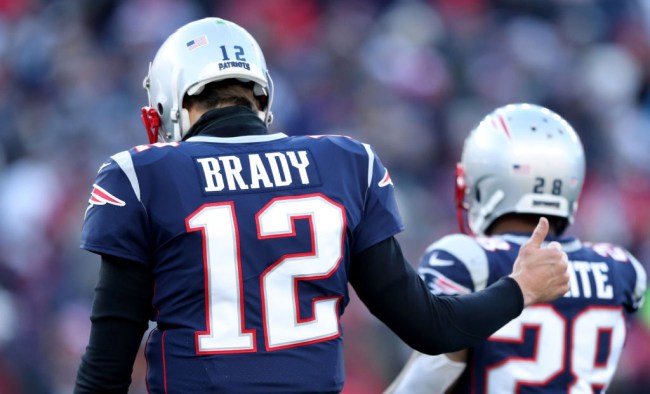 Patriots quarterback Tom Brady has apparently decided to follow the path the GOAT Michael Jordan used to follow by manufacturing slights against him as motivational fuel for this year’s NFL playoffs.

After crushing the Chargers on Sunday to advance to the AFC Championship game for the eighth straight season, Brady told Tracy Wolfson and everyone watching when asked about facing the Chiefs, “It will be a good game, they’re a good team, and we played them earlier this year. I know, you know, everyone thinks we suck, and you know, we can’t win any games. So, we’ll see. It’ll be fun.”

Brady said he's been hearing all the bullshit yall been taking this season 😂😂😂 pic.twitter.com/uVxW5am1bJ

Those poor Patriots… never getting their due, amirite, Tom?

Apparently, I am, because Brady was still feeling it late Sunday night when he posted this photo to Instagram…

So what does F.E.A. stand for? Take a wild guess, but based on Brady’s recent saltiness, more than likely it means “F**k ’em all.”

Interesting exchange between Tom Brady and Jacoby Brissett on Instagram. Consensus seems to be that F.E.A. stands for “F*** ‘Em All” pic.twitter.com/lAQpUvySoo

In related Tom Brady news, did his comically-oversized warmup coat somehow manage to get even bigger on Sunday?!

Is Tom Brady’s coat getting bigger? An investigation:

According to the number-crunchers over at SB Nation, at this rate of growth, in nine weeks, Brady’s coat will be 8.5 feet wide — taking up the entire Patriots’ bench.