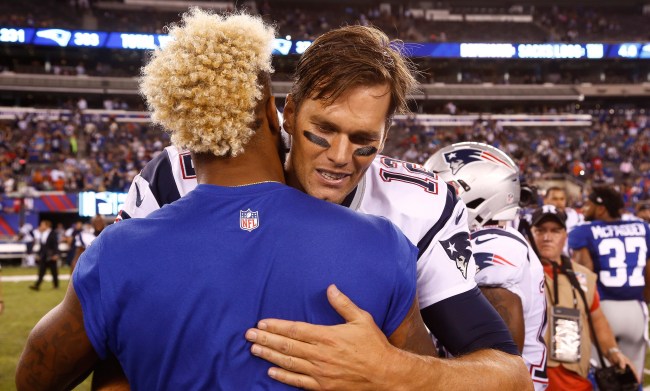 Back in February, NFL fans on the internet, especially those residing in the New England and NYC areas, lost their damn minds when wide receiver Odell Beckham, Jr. made a comment on one of Tom Brady’s Instagram posts.

On a photo of Brady’s kids watching a sunset, OBJ dropped a comment out of nowhere that read, “Love u brother.”

That was all it took and Twitter was off to the races.

This caused the rumor mill to turn into a raging inferno about Beckham going to New England, but on Wednesday CBS Sports’ Jason La Canfora claimed three teams are play for OBJ and none of them are the Patriots.

That will all change today. At least in the minds of many on social media.

Why? Because on Wednsday, Brady posted photos of his sponsor Aston Martin’s new vehicles unveiled at this year’s Geneva International Motor Show.

Beckham saw Brady’s post and wrote in the comments, “Waitin for mine tooooo!!! SHEESH.”

When TB12 saw that, he invited Beckham to “come to Foxboro for a test drive.” (Note: Brady does not live in Foxboro. He just works there, so… connect the dots.)

Brady also got in an A+ dig on his BFF Julian Edelman when #11 wrote in the comments, “Still waiting for my car bro…”

This new development has pretty much sent NFL fans outside of New England into panic mode.

@darren_hartwell “we’re sure nobody in New England will overreact to this” literally made me LOL. Well done! #OBJtoNE? @obj? @Patriots? pic.twitter.com/zb7Yna3OVd

Everyone outside of New England pic.twitter.com/3ivJfGfPXQ

Whatever. Go ahead and trade for Beckham, New England. I don’t care anymore. Heck, sign Antonio Brown and Le’Veon Bell too while your at it. I give up.