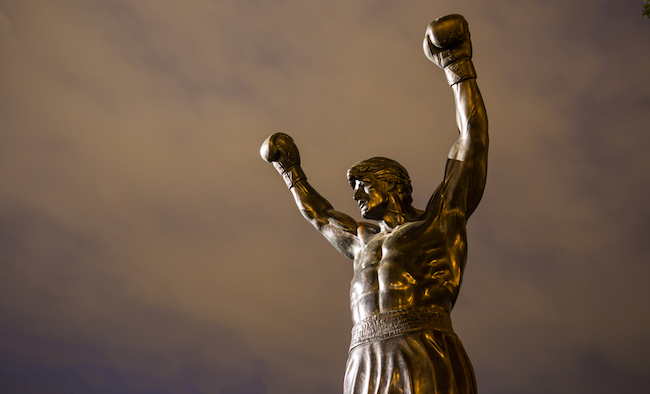 On Sunday, the most insufferable fanbase in the NFL will go head-to-head with the most hated group of supporters in the league in a battle for bragging rights when the New England Patriots take on the Philadelphia Eagles in Super Bowl LII. The citizens of Philly and Patriots Nation started duking it out in the form of various boycotts and bans almost immediately after the two teams secured their spot in the contest advertisers are legally required to refer to as “The Big Game,” and it appears the fun is only getting started.

Last week, Philadelphia mayor Jim Kenney made a wager with Bill Carpenter— the head of the city of Brockton, MA— concerning the statues in each locale dedicated to a famous “Rocky.” Carpenter said he would put an Eagles jersey on the monument dedicated to boxing legend Rocky Marciano in the event of a New England loss as long as Kenney agreed to put a Patriots jersey on the infinitely more famous statue inspired by the title character in Rocky if his team comes up short.

However, it doesn’t appear Pats fans are waiting for the game to be played to make their mark on enemy territory.

On Friday, someone (or a group of someones) headed to the steps of the Philadelphia Museum of Art— the same place where an Eagles fan recently recreated Rocky Balboa’s iconic sprint up the stairs with a dune buggy— with a Tom Brady jersey in hand. I have no idea how they managed to pull it off, but the statue was eventually outfitted with Patriots gear that apparently remained on Rocky’s torso for 12 hours before it was taken off.

On Friday night, someone installed a Tom Brady jersey on the The Rocky Statue in Philadelphia.

It stayed up there for at least 12 hours before it was removed. pic.twitter.com/iwJYVLF1Pt

I’d say Eagles fans should head to Brockton to respond in kind, but based on everything I know about Brockton, they should just do themselves a favor and take the loss on this one.