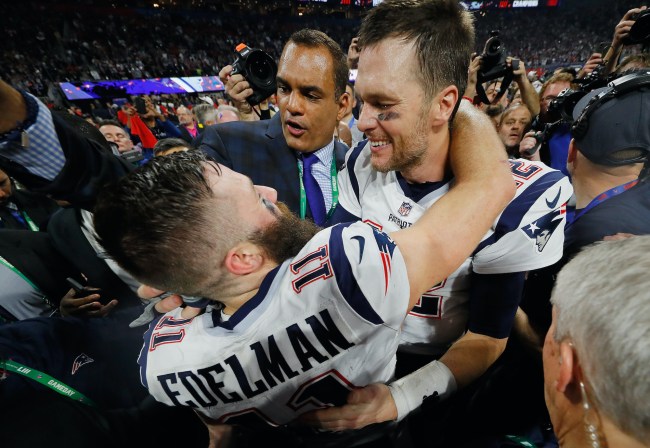 Edelman, 34, was drafted by the New England Patriots in the seventh round of the 2009 NFL draft, where he’d go on to win three Super Bowls with the team and become one of Tom Brady’s most trusted weapons in the process.

After officially announcing his retirement on Twitter, Brady — who left New England prior to last season — sent his former go-to slot receiver well wishes and congratulations on a great career.

“On the biggest stage and in the biggest moments, you always came through. You never lost that chip on your shoulder and you never let anyone define you as a person or player. I’m proud of you Jules. Love you,” Brady tweeted.

On the biggest stage and in the biggest moments, you always came through. You never lost that chip on your shoulder and you never let anyone define you as a person or player. I’m proud of you Jules. Love you @edelman11 https://t.co/7i5Qb6msor

During his 11-year career, Edelman had 620 receptions for 6,822 yards and 36 touchdowns. While he never made a Pro Bowl, Edelman was a consistently clutch player, as he had 118 catches for 1442 yards and five touchdowns in 19 career playoff games, which is the second-most all-time behind Jerry Rice.

Edelman’s career will obviously be best remembered for his ridiculous catch in the New England Patriots’ legendary comeback against the Atlanta Falcons in Super Bowl 51.

With just 2:28 left in the game and the Patriots down eight, Brady targeted Edelman on a 23-yard pass across the middle, but the passed was tipped in the air — and should’ve been intercepted by — Robert Alford, who took Brady to the house for a Pick Six (the second-longest in Super Bowl history) earlier in the night. What followed is a moment that would come to define Edelman’s career, and is far more enjoyable to watch than read about:

Obviously, the question now becomes whether or not Edelman will pop back up in Tampa Bay with his old buddies Brady and Rob Gronkowski. After all, Edelman’s contract with the Patriots was technically terminated. Given the tone of his retirement video, though, a South Flordia Super Bowl run comeback seems unlikely, at least right now.

By having his contract terminated for a failed physical today, former Patriots' WR Julian Edelman now becomes eligible for injury protection benefit, per the CBA, available to all players in this situation. Edelman can collect up to $2 million through this benefit.