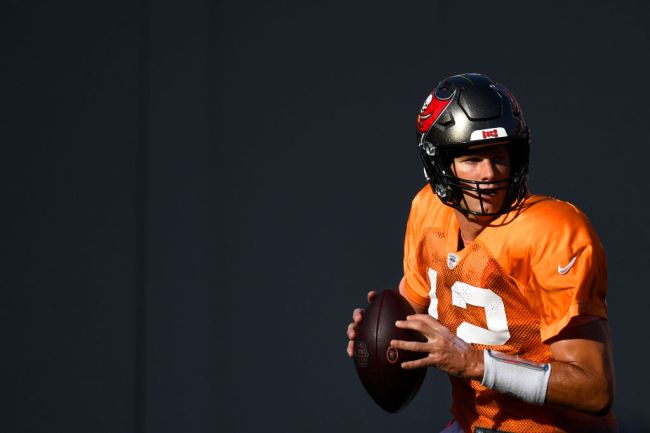 Gonna just get ahead of this one: I absolutely despise Tom Brady, so if you’re looking for unbiased analysis, you aren’t going to find that here. Sorry not sorry. This is what 20-plus years of being a New York Jets fan will do to you. My distaste for Brady goes beyond the football field, though, whether that be because of his penchant for locking lips with his son AND his Dad, or strategically placing political paraphernalia in his locker and then getting all butt hurt when journalists naturally ask about it. Do I respect the guy? Of course — he’s one of the greatest athletes of not just my lifetime, but any lifetime. He’s arguably the greatest football player who ever lived. Still, legitimate admiration for the man aside, I just can’t stand him.

For example, take these latest quotes that Brady spilled down at the Tampa Bay Bucs’ minicamp, where he revealed that played through last season with a knee injury:

“It was an injury I dealt with really since last April, May. I knew I’d have to do something at the end of the year, and happy I did it. It was probably something that certainly needed to be done and there was a great outcome, so I’m very happy about that. I feel I’ll be able to do some different things this year than I was able to do last year.”

The issue, though, is that the Bucs’ never disclosed that information on *any* of their 2020 injury reports, which is a violation of NFL rules. As a Jets fan, I’d know, as Gang Green was fined by the NFL during the 2009 season for not reporting on Brett Favre’s injured bicep.

Brady could’ve — and according to NFL rules, should’ve — disclosed his injury multiple times during the 2020 season. Instead, he waited until now — long enough that opposing teams can’t target the injury, while also giving fans and analysts alike the chance to praise the toughness he displayed in playing hurt. Otherwise, why mention the injury at all? Brady’s been in the NFL long enough to know not being included in the injury report is against the rules, and yet he made the team’s rule breaking clear, anyway. For the good of the Bucs organization? Surely not. But for his own ego? Absolutely.