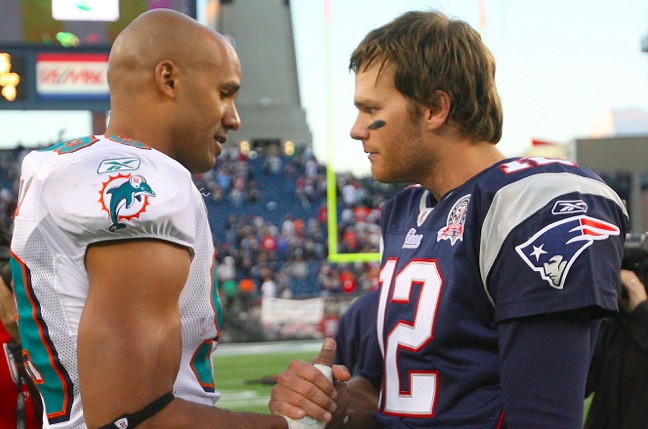 Jason Taylor is one of the premiere defensive ends to ever play the game. The six-time Pro-Bowler and three-time first-team All-Pro has been recognized for his stellar 15-year career with football’s most prestigious honor, an induction into the Pro Football Hall of Fame after making just his first appearance on the ballot. Taylor said he had “zero expectations of making it.”

Taylor’s induction likely stood on its own, but a recommendation from arguably the greatest quarterback to ever live could not have hurt his case either. Tom Brady sent a thoughtful letter to the HOF voters praising Taylor’s character, work ethic, and natural ability. This will likely be framed and put in Taylor’s home office for the rest of his days.

This is the letter from Patriots QB Tom Brady to HOF voters pushing for @JasonTaylor to be inducted @nbc6 pic.twitter.com/7S69LrZ3lK

Taylor has lauded Brady’s abilities in the past, saying that Brady is the only quarterback he ever helped off the ground, solely out of respect.

The slight irony in Brady writing a letter for Taylor is that Ty Law, Brady’s teammate for five seasons in New England, was also on the ballot and Brady apparently did not send a letter for him.

“I was floored when I saw the letter. I really was. Seth Levit, the director of my foundation (the Jason Taylor Foundation) and office here in Florida, actually texted me that Tom had sent a letter in. I guess Seth had been talking to the people in New England and got the letter down here, and I was floored. It means the world to me.

“I know Ty played with him, and Ty was kinda like, ‘What? Brady wrote you a letter?’ But it is one of those things where I will take it and frame it.”

Always good to see heated rivalries end in reverence. Congrats to Jason Taylor on the honor.