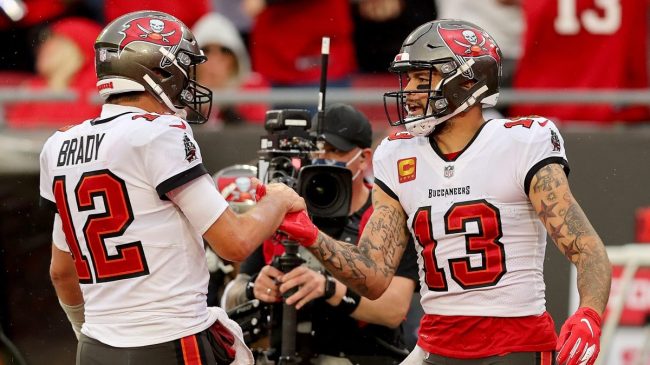 The Tampa Bay Buccaneers and the New Orleans Saints haven’t been on friendly terms for quite some time. Mike Evans is now suspended one game after getting in a fight with Marshon Lattimore and the entire New Orleans defense. Now, Tom Brady breaks silence on his wide receiver and the fight.

That’s right. The future Hall of Fame quarterback is thankful for Evans getting in the scrum. Mike Evans himself even tried explaining to the referees “It’s Tom Brady! What am I supposed to do?” Regardless, Brady claims, “the fact Mike would come out there to defend me, means the world to me as a teammate and as a friend,” per the Lets Go! Podcast.

Tampa Bay is sure to miss Evans in Week 3 as they face the Green Bay Packers. Hopefully, the other wide receivers on the roster are healthy enough to play, otherwise, it could be a long day for the Buccaneers. Despite that, Tom Brady will do what he normally does and find the open man, regardless.

However, Brady’s comments makes it sound like Evans will be the top target for the rest of the season. That’d be a great way to show his appreciation for Mike Evans defending his quarterback. Well, at least that’s what I’m hoping happens for my fantasy football squad.

Look for Tampa bay to do their best without Evans in the lineup. Tom Brady might have to get creative, but they’ll have a shot to beat the Packers in Week 3 with or without their top wideout.