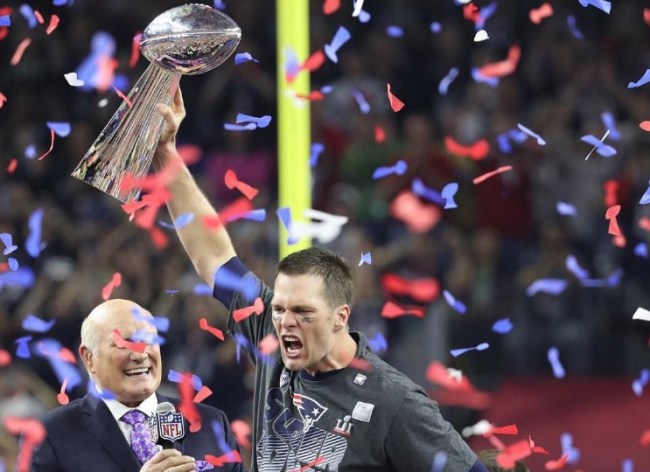 Do you wish there was more coverage of Tom Brady? Well, your wish has been granted because there will be a Tom Brady movie AND a Tom Brady book coming out.

The Brady book and film will chronicle the New England Patriots superstar’s come-from-behind win in Super Bowl LI, but it’s not going to shy away from controversy and will include the team’s battle to overcome the Deflategate debacle in 2014, follow Brady’s fall from grace and then his triumphant return to lead the Patriots to his fifth world championship. That surprising overtime victory against the Falcons this month cemented Brady’s and Bill Belichick’s legacies as the top quarterback and head coach in NFL history.

The writing team of Paul Tamasy and Eric Johnson, who penned films as The Finest Hours and The Fighter, will collaborate with Casey Sherman and Dave Wedge, who created the book Boston Strong, that Tamasy and Johnson turned into the movie Patriots Day starring Mark Wahlberg. Tamsay wrote the screenplay for Air Bud: Golden Receiver, so he already has vast experience in great football movies.

The movie based on the Super Bowl LI MVP won’t be out for several years, which gives Brady time to add to his legacy and beat out Charles Haley, who he is tied with for NFL player with the most Super Bowl rings (five).

This comes after news that there will be a biopic titled “The Secondary” on the life of New England Patriots cornerback Malcolm Butler.

So the only question that remains is who will play Brady – Matt Damon or Mark Wahlberg?