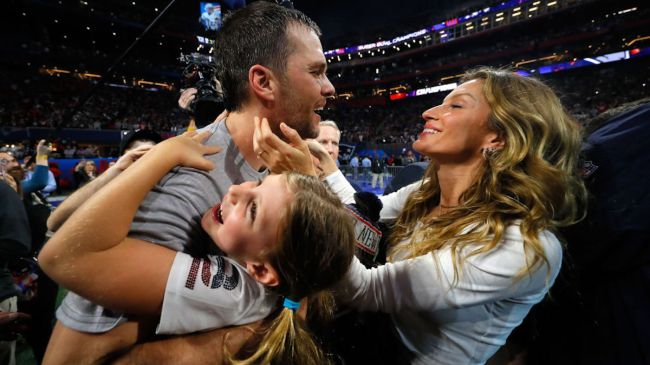 45-year-old Tampa Bay Bucs quarterback Tom Brady is not only having a tough time on the field this year, but he’s also having a very difficult, and public, difficult time off the field, too.

Last week, after months of rumors, Brady’s divorce from his longtime wife, supermodel Gisele Bundchen, was made official. Brady issued a statement about their split and asked for privacy during this difficult time.

“We arrived at this decision to end our marriage after much consideration. Doing so if, of course, painful and difficult, like it is for many people who go through the same thing every day around the world. However we wish only the best for each other as we pursue whatever new chapters in our lives that have yet to be written,” Brady’s statement on social media read in part.

According to a new report from People, the divorce was “never Tom’s idea” and that he was “really trying to fix” their marriage, which he really “wanted to work out,” all the way up until the 11th hour.

The insider says that “near the end” of their marriage, Brady, 45, “was trying to make things work, and to make things right.” “But at that point, it was a little bit too little, too late.” [via People]

Additionally, the report states the main reason Brady tried to save his marriage to Bundchen was that he didn’t want his kids to be children of divorce. The source that People spoke to  also reiterated that the root of the pair’s divorce came from Bundchen’s feeling that the future Hall of Fame six-time Super Bowl champion “wasn’t as attentive as he should’ve been.”

The power couple’s divorce also comes the same year that Brady briefly retired from the NFL for a 40-day period, only to later unretire and return to the Tampa Bay Bucs for a 23rd NFL season. At this time, the Bucs are struggling and currently possess a 3-5 record. Brady, however, is playing predictably well despite his clearly diminishing physical skills, as he’s completed 66% of his passes for 2,267 yards, nine touchdowns, and just one interception.

RELATED: Pat McAfee Weighs In On Tom Brady’s Divorce As Only He Can, Says The QB Is In Uncharted Waters