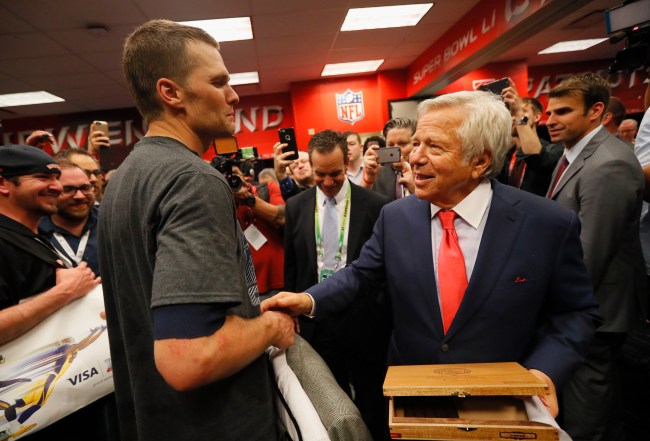 After Tom Brady delivered six championship rings in nine Super Bowl appearances to the New England Patriots during his 20-year career with the franchise, it’s only fitting that the team’s owner, Robert Kraft, developed quite the lover affair with the guy. More than just a player, Brady was like Kraft’s son, with the two bonding over more than just wins and titles on the gridiron.

When Brady decided to leave the Pats this offseason to join the Tampa Bay Buccaneers, the entire football world was shocked, including Kraft. It ended one of the most successful duos in sports history, with both Tom Brady and Robert Kraft becoming legends because of one another, with the former meticulously tossing the football around, and the latter strategically writing checks to fill out the roster around his quarterback.

But because all good things eventually come to an end, when Brady left, Kraft found the pill hard to swallow. And in a new book written by Jeff Benedict entitled “The Dynasty” — which is all about New England’s run over the past two decades — we now know what Kraft texted his longtime signal-caller the day he decided to leave. As you might imagine, it was nothing but love from the billionaire owner.

Here’s an excerpt that was in Peter King’s Football Morning in America on Monday:

“Alone in the doorway, Kraft waved as Brady’s taillights disappeared in the darkness. Thirty minutes later, sitting alone in his house, Kraft texted Brady: “Love you more than you know for being so classy in everything you do. Your parents should be so proud. I love them for creating you. You are truly one of a kind.”

Man, that’s pretty awesome, and shows the class of Robert Kraft. I know, I know, the dude has his deficiencies — like the whole massage parlor thing, among other things — but, hey, we all do. Seeing how he treated his superstar quarterback after Tom Brady left shows their bond was deeper than football, and really was like a father-son relationship. That’s pretty cool.

I mean, think about how Kraft could have reacted (Example: Dan Gilbert when LeBron James left the Cleveland Cavs in 2010, which was embarrassing AF), or, within the Pats’ own organization, how Bill Belichick has treated the whole thing. Instead, the owner took the time to congratulate and thank Brady, while telling him how much he loved him. That’s the ultimate sign of respect and praise.