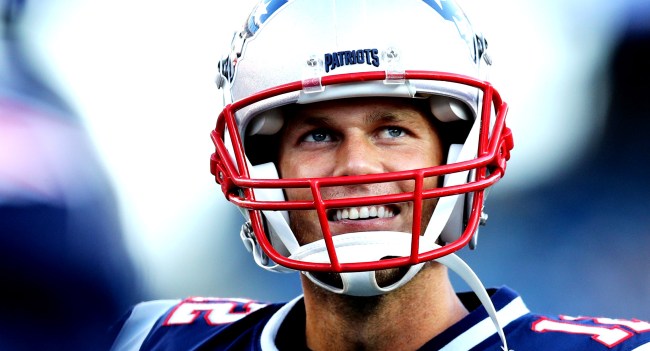 This is a day that we have known would be coming ever since Tom Brady, after playing football for 20 years in a New England Patriots uniform, moved to Tompa Bay and signed with the Buccaneers.

No, your eyes do not deceive you. That’s not wide receiver Chris Godwin rocking the number 12 in a Bucs uni. That’s the new TB in TB, Tom Brady.

And those are just four of the 41 PHOTOS that the Tampa Bay Buccaneers released of Touchdown Tommy on their website.

That’s right. 41 PHOTOS. I’d say they are very excited about their new acquisition down in Tampa.

Though, a lot of fans have already gotten a preview of the jersey itself in the weeks since Brady signed. Five different versions of his jersey appeared on the Top 10 list of best-selling jerseys that NFL Shop put out as recently as last month. Brady fans and Bucs fans alike were scooping them up by the droves in red, pewter and white.

Now, we get to see what that jersey looks like actually on the player. The home red features an outline of orange on the white block numbers. The pewter, a fan-favorite, can be worn this season a maximum of three times. The white looks incredibly crisp against the dark background and Brady’s Florida tan.

That tan was probably helped by the time outside Brady has spent training, both at his home and with his teammates in practices the veteran quarterback has organized in recent weeks. He’s brand new to Tampa Bay but Brady is all Buccaneer and now looks the part, too.

Many NFL fans, on the other hand… well, they’re just in shock.

Never gonna get used to this

It looks very weird seeing Brady in that

Yeah, this is going to take a while to get used to.