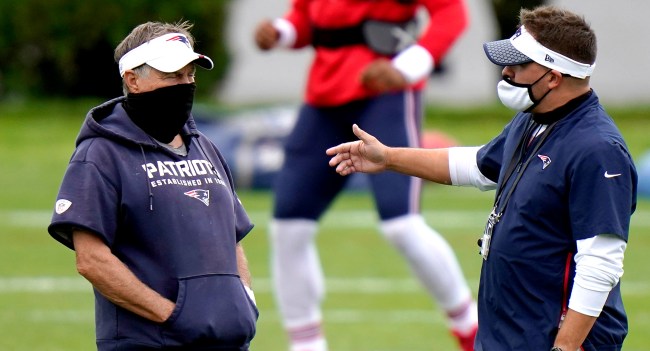 In case you were wondering how much New England Patriots head coach Bill Belichick would miss not having his quarterback of 20 years, Tom Brady, in training camp this season, it turns out that he is actually pretty okay with it.

At least that’s what he would like everyone to think based on Friday’s media session with reporters in which *gasp* The Hoodie actually gave more than a five word response when asked about the guy he won six Super Bowls with under center.

When asked if it was strange to not see Tom Brady in the building this season, Belichick responded, “Well we’ve had a lot of great, great players over the course of that time. You could have the same conversation about all of them – Tedy Bruchi, Rodney Harrison, Ty Law, Logan Mankins, Rob. You could go right down the line. So, it’s professional football. It’s the National Football League. Every team has changes every year. We have ’em, so does everybody else. I think right now, everybody’s focused on this year.”

He added, “We’re looking ahead. We’re not looking backwards at anything. We’re trying to look ahead and look at what are our opportunities, challenges that we have coming forward this season in the 2020 season. So that’s really where our focus is.”

One of those challenges is related to that very position Tom Brady vacated when he signed a two-year deal with the Tampa Bay Buccaneers for what could end up being $59 million.

Because Brady’s potential replacements have not exactly been lighting the world on fire as of late.

Cam Newton was basically ignored by every other team in the NFL following being let go by the Carolina Panthers.

Brian Hoyer has thrown a grand total of 73 passes over the past three seasons.

Doth the man protest too much? Or are the Patriots really not concerned because they’re secretly tanking for Trevor?