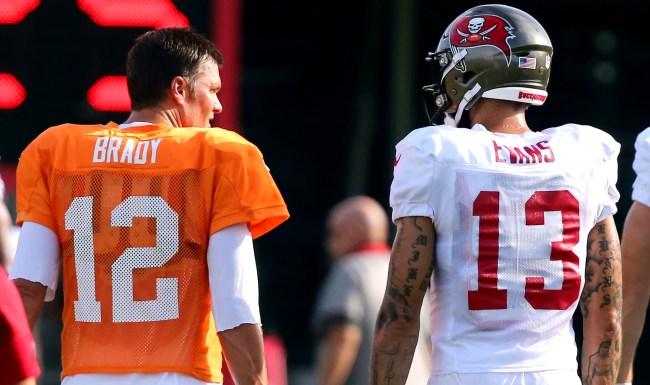 Tom Brady may be playing quarterback for a new team for the first time in 20 years, but he’s still got his All-Pro level dad joke sense of humor when it comes to the things he shares on social media.

Brady, who spent all summer ignoring the state of Florida’s social distancing guidelines while getting ready for the 2020 NFL season, is officially now in training camp where that sort of behavior is actually not frowned upon.

He must be doing pretty well too, because star Buccaneers wide receiver Mike Evans recently heaped a ton of praise on the six-time Super Bowl champion.

“He’s the GOAT, on and off the field. It’s crazy. He’s a superstar — the most accomplished player in our game in history, and he’s just like everybody else,” Evans told ESPN. “He just works extremely hard, he’s always taking care of his body. He loves his family. He loves family time. He’s just cool. He’s a real down-to-earth guy.

“He’s already up there as one of my favorite teammates, and we’ve only had a few practices together. So that says a lot. I’m learning a lot from him and hopefully we can tear it up this year.”

Brady seems pretty happy with how things are going down in Tampa as well, posting several photos to his Instagram along with a “letter” to his parents in the same style that kids do when writing home from camp.

“Dear Mom & Dad: Yesterday was the first REAL day of camp. They finally let us put on the pads and run full speed,” wrote Brady. “And they gave me a special orange jersey so the big guys can’t hurt me. My friends Ryan and Blaine let me have all the blue freeze pops. They’re really nice.

“I can’t wait for you and all my friends to see me and my new friends play football, which I have been practicing a lot. XOXOXO, Tommy.”

Brady’s letter to his parents from training camp is hilarious 😂 @TomBrady @Buccaneers pic.twitter.com/36HpVGssbQ

Not that he isn’t still getting yelled at by his head coach, even if he is on a new team.