Tom Brady Takes A Dig At The Patriots, Explains Why He’s Having More Fun Playing For The Buccaneers 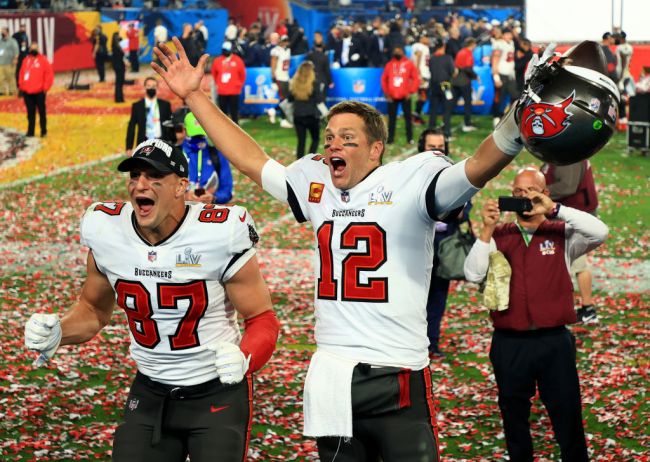 Tom Brady’s time as a Buccaneer has not been awful, to say the least. In his first year in Tampa Bay he raised the Lombardi Trophy for the seventh time in his career. That would make any player happy, but something seemed to change when the 44-year-old QB arrived in Florida.

If Brady has seemed more open to the public, a little more honest with the media, and smiling a bit more, well, that’s because he’s simply a happier man.

By no means was Brady’s life bad as a Patriot, he was winning Super Bowls, married to his supermodel wife, and had his family, but things are simply different for TB12 in Tampa. Different in a good way.

Brady recently acknowledged that both being a Buccaneer and getting older have caused his outlook to change while also allowing him to find his voice and be a bit more authentic. He also explained that he’s enjoying his time with teammates and coaches, which certainly sounds like a dig at Bill Belichik and how things are run in New England.

“It’s nice that I’ve found my voice more,” Brady said, according to ESPN. “I really enjoy being around my teammates, my coaches — it’s been a different environment. [I’m] just really enjoying the experience of playing football, playing with this group of guys.”

Other Players Have Noticed A Change In Brady As Well

“He’s definitely loosened up a lot,” Stallworth said. “I’ve just kind of sat back and enjoyed it all. It’s something that I’m personally glad he was able to do. .. People are able to see him for who he is while he’s a player.

This is all good news for Brady and the Bucs, but bad news for the rest of the NFL. As long as he’s having fun and competing at this type of level then the rest of the league is doomed for the foreseeable future.