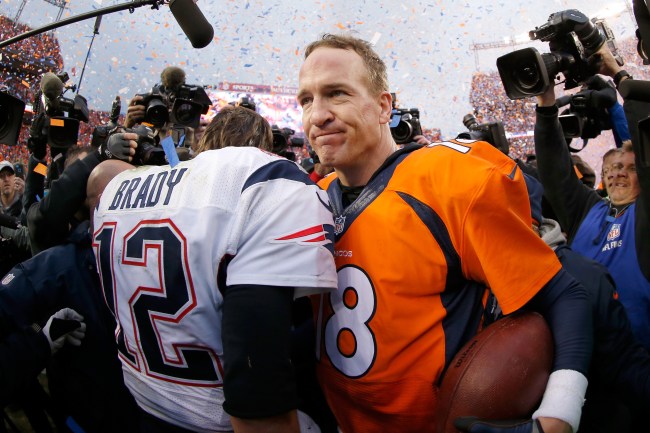 Let’s take a look at the stats: Brady has won 3 NFL MVPs while Peyton Manning won 5. Tom has won SIX Super Bowls (and counting) including 4 Super Bowl MVPs and Peyton won 2 Super Bowls and 1 Super Bowl MVP. Head to head, Brady holds the 9-3 record over Peyton during the regular season but Manning is 3-2 against Tom in the postseason which has to sting for the Pats (Brady’s 11-6 overall vs Peyton).

For as long as these two were competing on the field, the narrative was that they were bitter rivals. Spoiler Alert: that’s not the case. Tom just shared a selfie with Peyton and the two appear to be wearing a suit-and-tie for a wedding, and Tom’s caption just shattered the illusion that these two are rivals.

They’ve been friends all along:

Spoiler alert… we were friends this whole time. Always great to see you Peyton! pic.twitter.com/DzscouMxsl

Part of me thinks that Tom rushed this picture out on his social media after uploading this peculiar picture where he looks like a goddamn wax statue, and another part of me thinks this might be the first time these two guys have ever gotten to sit back and chill together without any of the competition.

As you can imagine, EVERYONE ON THE GODDAMN INTERNET had jokes to make about two GOATs hanging out and how they couldn’t handle these two legends being friends instead of rivals.

I’d just like to point out how well dressed they are. They’re both rocking perfect fitting collars and suits that are almost certainly bespoke. They look great for a pair of old ass men.

I don’t even need to click this person’s bio to know they’re a Pats fan:

Can everybody in this replies thread stop saying "2 goats" because Peyton Manning has nothing on the GOAT.

Except every single individual stat and head-to-head playoff record.

i mean. not really. his TD’s in a season stat will be the only thing standing by the time brady and brees retire. pic.twitter.com/XyelpVbcdb

The GOAT and tom brady

Brady/Manning was to the NFL what Magic/Bird was to the NBA. I enjoyed both “rivalries” immensely. Both pushed each other to greatness. https://t.co/gtYbSpyvcc

This one makes me sad. Mostly because the closest thing we could ever get to this now is a Brady vs. Eli Super Bowl and that’s 10000% never going to happen again with the current state of the New York Giants and Eli’s declining career.

This picture lowkey make me miss the hype around the Brady-Manning games https://t.co/qPp4K9eVjU

I love this comment from Dwayne ‘The Rock’ Johnson on Instagram…”therock: If you two had just a little more drive and ambition, it’s crazy to think what you could’ve become”…Famous people poking fun at other famous people is and will always be entertaining.

It’s also worth noting how literally every single fucking famous person on Instagram felt compelled to comment on this picture. It’s as if they couldn’t stop themselves from commenting in order to drive up those likes/follows.