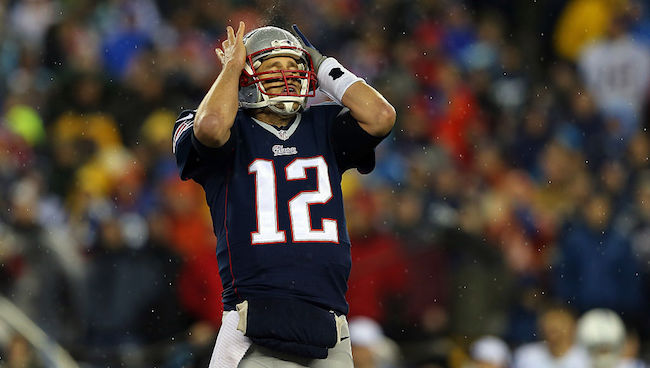 The New England Patriots and the Philadephia Eagles both traveled to Minneapolis this week to kick off the festivities ahead of Super Bowl LII, which began with the time-honored tradition known as Media Day. Roving packs of reporters spent the night swarming players and coaches like lions flocking to an injured gazelle on the hunt for quotes and soundbites.

The infinitely entertaining Rob Gronkowski was notably absent from the floor at the Xcel Energy Center in St. Paul, which was a real shame for anyone who was hoping to place a prop bet concerning the number of times he’d make a reference to the number “69” in his interviews. However, reporters spoke to plenty of other members of the Patriots and somehow managed to get some pretty solid responses from noted Generic Answer Givers Tom Brady and Adjustment Bureau cosplayer Bill Belichick.

Brady was asked a question about his memories of visiting Minnesota as a child (most of his family on his mother’s side resided in the tiny town of Browerville), and he decided to share an anecdote about the time he got to live the carnival scene from The Sandlot in real life the first time he tried chewing tobacco.

Tom Brady tells a story about his uncles giving him chewing tobacco after fishing in Minnesota and telling him he's not allowed to spit it out pic.twitter.com/afbPte7Ufi

Here’s the full story if you’re too lazy to watch the whole thing:

“I remember my uncles gave me chewing tobacco for the first time when I was really young. We were fishing, it’s a pretty good story. We went sunfishing and on the way home I said ‘I want to try it,’ and they said ‘Look, if we give it to you, then you can’t spit it out until you get home.’ It was like a 30-minute drive back to my grandpa’s farm. So of course they give it to me, and within five minutes I’m outside of the car throwing up all over the place.”

Brady didn’t say if his uncle snuck him a copy of Playboy and a six-pack of Schlitz when they got back to the farm, but it can probably be implied.