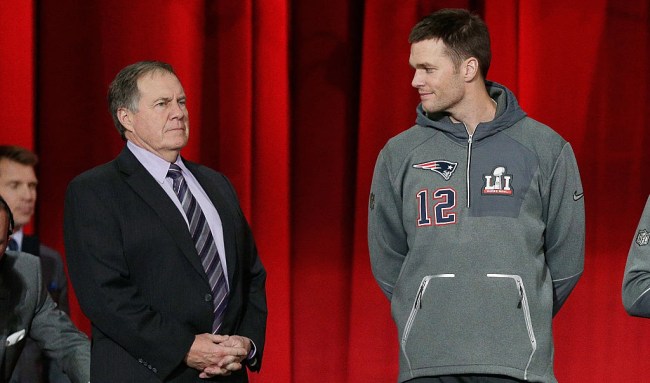 With this being the 10th time the New England Patriots have been to the Super Bowl, reporters at Media Day are probably running out of things to ask Tom Brady, who will be making his eighth appearance in the big game. However, there is still one mystery that the media has yet to solve: what, if anything, actually makes Brady’s coach Bill Belichick smile?

After all, we know that the list of things that make Belichick angry, upset, irritated or annoyed is very, very long.

At first, Brady struggled, saying, “I have no idea.”

With a little help from the reporters, TB12 did actually come up with four things, “Just say Navy, lacrosse, Lawrence Taylor… Bon Jovi. Those four.”

Tom Brady saying lacrosse is one of the four things that make Bill Belichick smile: pic.twitter.com/k1LYM5Srfp

Apparently, one other thing that also makes The Hoodie smile is wearing his dad’s fedora, something he did as he made his grand appearance in Minnesota for Super Bowl LII.

He even smiled when talking about it. “That was my dad’s hat, so I thought I would just toss that one on today,” explained Belichick to NFL Network’s Willie McGinest. “I felt good about wearing it. Minnesota’s a good place to have a hat.”

Bill Belichick got off the plane wearing a hat that is special to him.

Later, he also laughed at a weak dad joke told to him by a reporter: “What did the football coach say to the pay phone? I want my quarter back.”

Bill Belichick laughed at a joke and might actually be human pic.twitter.com/oGsNcA0am0

I have no idea who this man is pretending to be Bill Belichick at Super Bowl LII, but for the Patriots’ sake I hope he can coach. Because according to Tecmo Bowl, the Eagles are going to win, while Madden says it will be the Patriots taking home yet another championship (making people in 49 states very unhappy). The coach might end up being the edge New England needs.