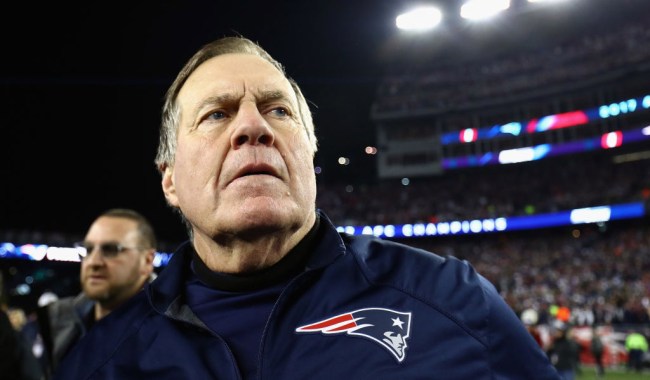 I hope for the New England Patriots to fail as much as the next guy who isn’t from the Boston area, but even I have to admit I am going to miss Bill Belichick, and especially his press conferences, when he retires.

As usual, Belichick was his normal cheery self during the AFC Championship post-game press conference after securing his 11th trip to the Super Bowl as a coach, the 10th as head coach of the Patriots.

“The Hoodie” wasn’t terribly impressed with Tom Brady playing well despite his hand injury and dropped the usual post-game platitudes that he knows so well… “really proud of our players, did a great job” … “we made enough plays” … “I couldn’t be prouder of the way our guys played” … yada, yada, yada.

He did actually have some high praise for the game’s MVP and luckiest man on earth today Danny Amendola.

“Danny’s such a good football player. When you look up ‘good football player’ in the dictionary his picture is right there beside it,” said Belichick. “It doesn’t matter what it is. Fielding punts, third down, big play, red area, onside kick recovery – whatever we need him to do. He’s just a tremendous player, very instinctive, tough, great concentration. He had some big plays for us today.”

Sun's out guns out pic.twitter.com/gyzgBnnmaU

Belichick in his homemade short sleeve sweat shirt looks like a serial killer on a Netflix show who just ate like ten people #Patriots #AFCChampionship pic.twitter.com/6KwAJwCphV

Bill Belichick looks like my dad before he mows the lawn @PardonMyTake pic.twitter.com/7fS6rlF2Tj

Belichick walked into a clothing store and asked what they had that could make him look like a hostage. #Patriots pic.twitter.com/Wx5c37eTwQ

This is how I look after a night out. This is how Bill Belichick looks after earning a couple million dollars. He always wins..(Literally) pic.twitter.com/SYtJCp6Egd

Belichick looks like a dad at a water park. pic.twitter.com/IDtIK85Spb

Bill Belichick has millions and millions of dollars but still shows up to press conferences looking like he’s homeless. 😂 pic.twitter.com/lCe3WiBew2

New theory: Bill Belichick doesn’t know that T-shirts are a thing that you can purchase pre-made. pic.twitter.com/rAxqRj7AAB

Now would you say Belichick’s attire is more “Flashdance” or Hans and Franz? Either way, I love it. pic.twitter.com/XJ5g9gn9hW

Did Belichick squeeze in a couple of quick reps on the weight stack before his presser? Great shirt. https://t.co/wbZ8nTOOAp

Belichick looks like he was just pumping iron on a rusty bench in his garage https://t.co/MLsmEACW8n

Bill Belichick is clearly fired up in his post-game press conference 😂😑#NotDone pic.twitter.com/Ljq5KXOJuC

Some one please buy Bill Belichick a new shirt

I'm rooting for the Eagles cause Bill Belichick cannot get any more comfortable. One more Super Bowl and I fear he's just going to do postgame press conferences in a robe with no underwear