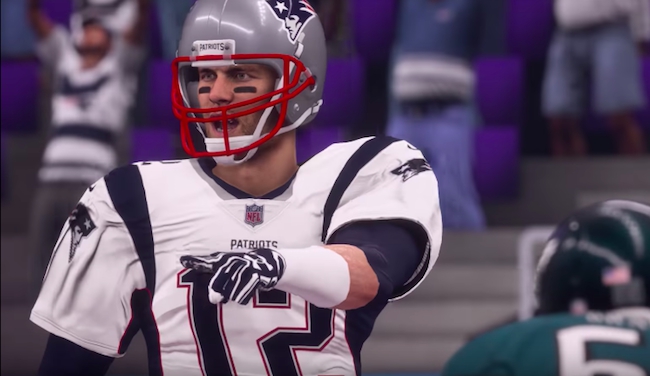 We’re less than a week away from the matchup between the New England Patriots and the Philadelphia Eagles at Super Bowl LII in Minneapolis on Sunday, and while almost the entire country will be rooting for Philly to pull off the upset, there are plenty of things besides the spread that point to the Patriots taking home their sixth Lombardi Trophy.

Eagles fans might have been optimistic when a Tecmo Bowl simulation conducted last week predicted they’ll eke out a win, but a slightly more high-tech experiment isn’t as encouraging. EA Sports released their annual Madden sim of the Super Bowl on Monday (which has accurately predicted 10 of 14 winners since its inception), and it forecasts New England will come away with the W in classic Patriots fashion.

The video— which is basically the digital version of an NFL Films production— shows the Patriots opening the game with a historically accurate slow start before gaining some momentum and scoring before halftime to take the lead heading into the locker room. The game’s final drive deviates a bit from the norm as it features Nick Foles— not of Tom Brady— trying to complete the two-minute drill, but he’s unable to pull off Minneapolis Miracle 2.0, which results in New England coming away with a 24-20 victory.

Brady will look to avoid falling victim to the Madden Curse that claimed teammate Rob Gronkowski last season and arguably carried into this year, as the tight end still remains under concussion protocol after being knocked out of the AFC Championship game.

However, the trailer features a Gronk Spike, so I guess we’ll see if that prophecy ends up coming true.