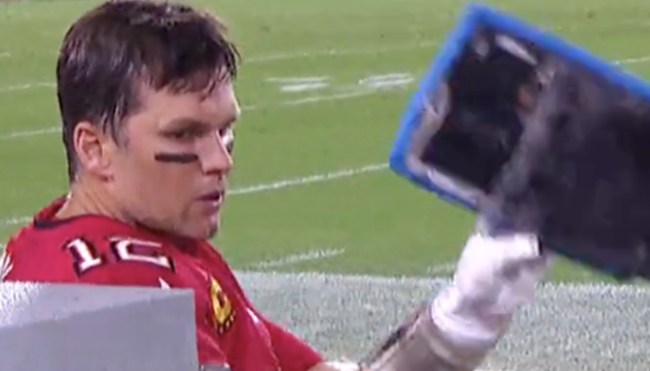 Tom Brady’s passion for the game he’s mastered over the course of his 22 seasons in the NFL is undoubtedly one of the major reasons he’ll walk away from the sport as one of the most celebrated players of all time.

However, the legendary quarterback delivered a very unBradylike performance when the Buccaneers faced off against the Saints in Tampa Bay on December 19th in a 9-0 loss that snapped a streak of 255 consecutive games he’d played without being shut out.

Brady all but guaranteed that impressive run would come to an end when he threw an interception late in the fourth quarter of the contest, and he took out his frustration by cursing out one of New Orleans’ assistant coaches before turning his attention to the Microsoft Surface tablet he destroyed after returning to his sideline.

Brady wasn’t hit with any disciplinary action for either of those outbursts, but on a recent episode of his Let’s Go! podcast, he revealed the NFL informed him he won’t be so lucky if he subjects another tablet to the same treatment.

Here’s what he had to say via ESPN:

“I did get a warning from the NFL. I can’t throw another Surface or else I get fined. Imagine that! Imagine that.”

I won’t throw another Surface. Although I think it was pretty good marketing for the Surface at the end of the day. I think it worked out pretty well for them.”