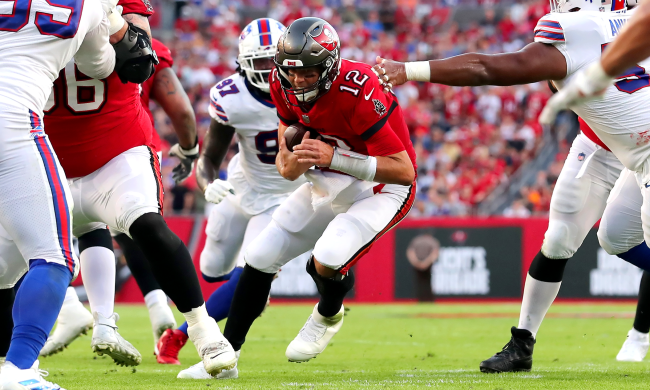 Back in 2018, Tom Brady said that the reason he wasn’t planning on retiring after that season was because he hadn’t “hit 1,000 career rushing yards yet.”

Somehow, despite having only one run in his entire career go for more than 20 yards (a 22 yard burst way back in 2006), Brady did manage to surpass by the end of the 2018 season.

Heck, NFL Films even made a video about Tom Brady’s quest for 1,000.

Among those naysayers are two former NFL quarterbacks: Tony Romo and Peyton Manning.

On Sunday, during the Buccaneers’ 33-27 win over the Bills, Tony Romo told the viewing audience, “Tom does that in the pocket all day long. That’s the same thing he does to move people with his eyes. Cuz he’s slow, right? He can’t actually make someone miss.”

Monday night, during the Monday Night Football “Manningcast”, Peyton Manning revealed that the Madden NFL 22 crew had allowed him to be a ratings adjuster and as a part of that duty he lowered Tom Brady’s overall rating down to a 44 (Brady’s age).

Tuesday night, Brady responded to both Romo as well as Manning with some video evidence refuting their assessment of his abilities, especially his ability to “make someone miss.”

“So I was rewatching the broadcast last night,” said Brady, who rushed for 16 yards on 7 carries and a touchdown. “And I heard Tony [talk about him being slow].

“So is he not watching? Because…” followed by some of his rushing highlights from Sunday’s game.

Brady then added, “Hey EA, tell Peyton to jack my speed rating back up.”

Tony and Peyton hating from the booth! Come on guys… @EAMaddenNFL pic.twitter.com/wLbyXHMrCr

That’s not going to happen if Buccaneers coach Bruce Arians has anything to say about it, and he did.

“That’s enough of that s–t,” Arians told reporters after the game, referring to Brady taking big hits while running.

“I think that’s the first time I’ve ever heard him swear,” Brady said with a laugh on the latest episode of the Let’s Go! podcast. “He’s right. He’s right. I agree with B.A. ‘Get my ass on the ground.’ That’s what I deserve. That’s where I should be. They’re trying to put me on the ground pretty tough, and they took some good shots yesterday. I think my days of running, they’ll be only if necessary at this point going forward.”

Brady has become 100x more likable since going to Tampa Bay, this is hilarious

Sadly, this is true.