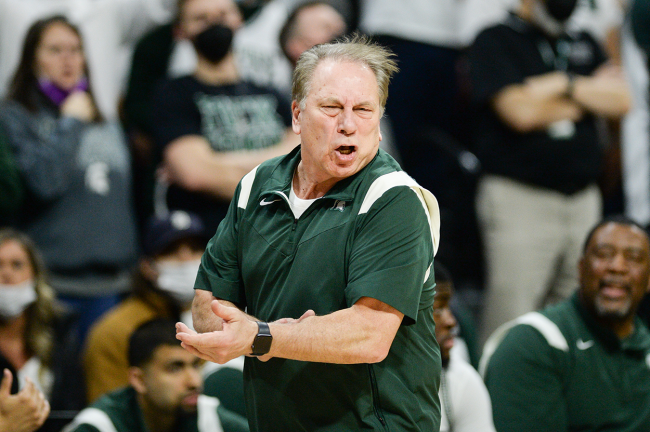 Tom Izzo really loves shaking hands and sportsmanship. The 67-year-old head basketball coach at Michigan State recently went on a wild, lengthy diatribe about postgame handshakes in which he said that his team will “shake air” if necessary.

Izzo’s rant came after a wild weekend in the Big 10. After Sunday’s game between Michigan and Wisconsin, head coaches Juwan Howard and Greg Gard got into an altercation that led to a postgame kerfuffle between both teams.

The incident stemmed from late-game clock management and gamesmanship between the two coaches. After the clock hit zero, Howard tried to blow past Gard in the postgame handshake. Gard didn’t let him walk by without at least making contact and put his hands on Howard, who proceeded to go off.

During the altercation, Howard swung with an open hand on a Badgers assistant. He has since been suspended for the remainder of the regular season.

On Monday, Izzo was asked for his thoughts on what happened.

Izzo called yesterday's Michigan-Wisconsin incident a "scary situation" and "bad for college basketball." Didn't want to comment on specific circumstances of it

In addition, there has been some discussion about removing postgame handshake lines to avoid things like what happened between Howard and Gard. While most people would tend to agree that there is no need to remove the handshake lines, Izzo wants to be very clear that he is adamantly against the idea.

During his diatribe, he made it very clear that his team will always shake hands. Even if there is no hand to shake, the Spartans will shake air.

Tom Izzo spent a lot of time today talking about the Michigan-Wisconsin incident. Adds that the discussion of removing handshakes from sports is "asinine."

Says he and his team will "Shake air" if another team decides not to after a game. pic.twitter.com/LnVDDJhtrD

The best part of Izzo’s rant is his air-shaking demonstration, followed by the dejected “sheeshhhusss.”