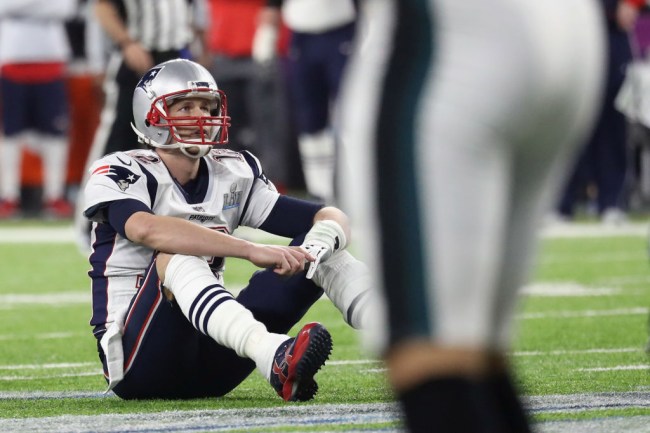 Very rarely do we get an in-depth glimpse into the private life of Tom Brady. The five-time Super Bowl winner doesn’t have a Twitter, joined Instagram just last year, and has admitted to not having many hobbies outside of football. I’ve been a Patriots fan all my life and I know Tom Brady the person just about as well as I know my dentist. (I haven’t been to the dentist since NFL players wore leather helmets.)

Brady gave us a peek into his obsessive life in a six-part series titled Tom vs Time, which launched in January. The 40-year-old takes us into his home to talk about family, success, longevity, French kissing his son, his relationship with controversial trainer Alex Guerrero, and his history with the Patriots franchise.

But, as of the beginning of March, only five of the six episodes had aired, leaving fans wondering when the season finale was going to drop. Well, it turns out, creator and director Gotham Chopra had to re-create a new ending, as he did not expect the Patriots to lose the Super Bowl.

“Everyone keeps asking me about Chapter 6 of ‘Tom vs Time’ and when it’s going to be ready. The truth is we had a plan, but unconsciously, it was tied to the Pats winning the Super Bowl and, when that didn’t happen (congrats, Eagles!), I felt like we needed to pause and recalibrate. While we have amazing stuff from the playoff run, Tom’s hand injury and the great comeback in the AFC Championship, once the Super Bowl played out, I started to wonder the relevance of all that other stuff and determined that we really needed one final exit interview with our guy before we could figure out what Chapter 6 was truly going to be about. This morning, we did that interview. It ran over an hour and we talked about a lot of things. I’m not gonna give anything away … but for curious minds, Tom was both reflective and upbeat, very present and disappointed in last Sunday’s loss, while also gracious toward the Eagles for their impressive victory and already unpacking everything to find the lesson in it. As a fan, I can say I got some great closure and I hope Tom did too in just talking about it. I can tell he’s burning up still on the inside. But I am also reminded why the guy is the GOAT and it’s all gonna be OK. So, Chapter 6 — ‘Coming Soon!'”

The final episode will air Monday at noon on Facebook Watch. Check out the trailer below.