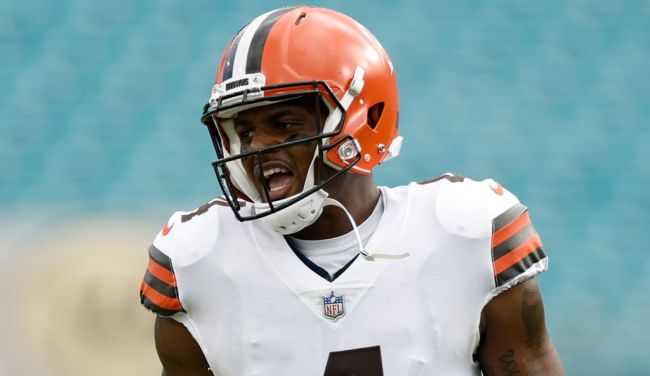 In response to the news that embattled Cleveland Browns quarterback Deshaun Watson would be suspended for 11-games and have to pay a $5 million fine in relation to various allegations of sexual misconduct, the lawyer representing 24 of Watson’s accusers has said the NFL “doesn’t care” about sexual assault.

In a scathing statement, Tony Buzbee — the attorney who brought 24 lawsuits against Watson — said that doesn’t “care” about victims of sexual assault and that NFL commissioner Roger Goodell’s “bark is much worse than his bite.

While Buzbee represented 24 women accusing Watson of sexual misconduct, those two dozen women don’t account for the entire scope of Watson’s alleged misdeeds as a New York Times report from earlier this year indicated that he met with 66 massage therapists over the span of 17 months.

Following the confirmation of his suspension, Watson — who foolishly said he apologized for the people “that were triggered” — indicated that he’s “looking forward to moving forward” with his career. However, given the reaction that a large portion of the NFL world has had to his relatively light suspension, the odds are Watson won’t be allowed to move on from these indicates when he does return to the field later this fall.

Despite the controversy surrounding him, the Cleveland Browns not only traded for Watson and shipped former #1 overall draft pick Baker Mayfield out of town, but they handed the 26-year-old signal-caller a fully-guaranteed 5-year, $230 million contract.

The Watson-less Browns will kick off their 2022 season against their old friend Baker Mayfield and the Carolina Panthers on Sunday, September 11.