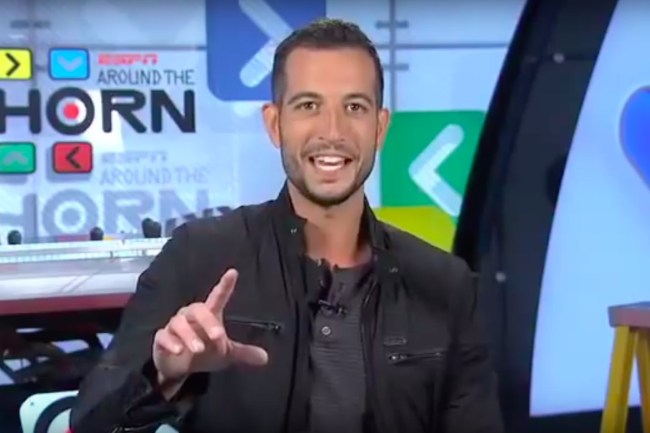 While I generally try to avoid wading into the pool of radioactive sludge that is American politics, every once in a while someone does something so stupid—so objectively dumb—that I can’t stop myself from temporarily joining the fray.

Earlier this week, Secretary of Education Betsy DeVos found herself in the middle of an incredibly predictable shitstorm after the agency released a budget proposal for the 2020 fiscal year that would cut any and all funding for the Special Olympics.

There aren’t many issues that are able to bring people together these days but this supreme act of idiocy grew scathing criticism from people on both sides of the aisle who can’t fathom why the DoE decided defunding the program should be a top priority—especially when you consider the proposed $17 million cut is a tiny drop in a gigantic bucket.

ESPN‘s Tony Reali is just one of the many people baffled by the move, and on Wednesday’s installment of Around the Horn, he took some time to address the issue with an impassioned speech that really put things in perspective.

.@TonyReali with thoughts on @SpecialOlympics and the ways we are all asked to include all people, everyday.

"This is a test for all of us. Do we include all? In what ways can we encourage better? We can't be brave in the fight and win unless we include and encourage all." pic.twitter.com/bg7aWGPiTH

Here’s a full transcript of his monologue via For The Win:

Athletes given the opportunity to discover new abilities, the joy, confidence and enhancement that comes from that goes both ways for all people. But the word is inclusion. Now I speak for myself here: I think the world would be a better place if everybody were included. Because this is a test for all of us now.

We’re in position to encourage other people every day. Do we? Think of all the ways we’re asked to unify and when we do and we fail daily, this isn’t about sides or plans. Encourage everyone, include everyone.”

Reali had previously hopped on Twitter to remind people just how vital programs like the Special Olympics are when it comes to forming an inclusive society.

And that in turn can lead to a more inclusive & fulfilling life. That fulfillment goes both ways; it’s that positive exchange of spirit and achievement that makes @SpecialOlympics so incredible & Unified Sports so rewarding.

I think the world would be a better place if everybody were included.

We can include everybody.

We will include everybody.

We are all in position to encourage other people, everyday. Do we?

Think of all the ways we do and we don’t-daily-and consider how this isn’t just about sides or plans, but it is about us. It’s ourselves we need to fight for.

This is what fighting the good fight looks like.