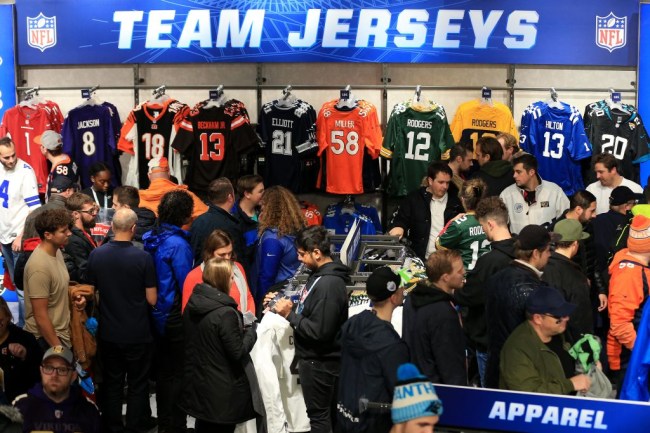 Let’s talk NFL jersey sales, shall we? Every year there seem to be one or two surprises on the Top 10 list and this year is no different.

At the midway point of the season, the NFL and the NFL Shop have released the list of the top-selling NFL jerseys for the 2019 season thus far and here they are in all of their glory:

One of these things is not like the other. Daniel Jones is the only rookie on the list.

Talk about a complete turn of events for the former Duke quarterback and Giants fans. Everyone went from absolutely hating the fact that Jones went No. 6 overall to New York in the 2019 NLF Draft, but now people are buying the man’s jersey left and right. Jones wins two games against the Buccaneers and Redskins and Giants fans can’t get enough of him.

Another slight surprise on the list is seeing Brady holding the No. 1 spot over Mahomes as it is the first time since 2015 that TB 12 has had the top-selling jersey in the NFL. Brady’s jersey sales numbers likely won’t slow down either thanks to the rumors circulating that this may be his last go-around in New England.

Perhaps the biggest shocker among the Top 10 list is the fact that not a single Browns player is on it. I would’ve absolutely guessed at least one of Baker Mayfield or Odell Beckham Jr. would be among the Top 10, but that doesn’t appear to be the case. It seems like folks in Cleveland simply don’t buy jerseys like fans in other markets, also, Cleveland is 2-5.

At the end of the day, it’s just another bragging right for the GOAT Mr. Tom Brady.