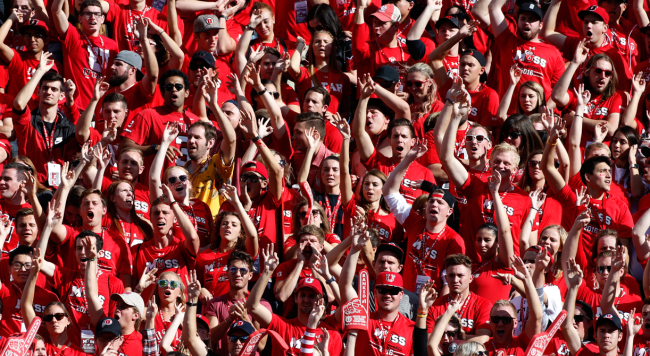 The school wants to know how they got into the stadium wearing nothing by body paint on their upper bodies and whether the ladies are students at the university.

“We want to be very clear that profanity, public intoxication, rude and disrespectful behavior, racial and derogatory comments or verbal attacks directed at individuals or groups will not be tolerated,” they wrote in a letter to all Utah football ticket holders.

“Anyone who engages in unsafe or inappropriate conduct will be removed from the premises, may lose all privileges and access for future university events and could be reported to law enforcement,” the letter continued. “We encourage all of you to help us identify and call-out inappropriate behavior so that our event staff can ensure a safe and great experience for our student-athletes, coaches, staff and spectators. If you see something, say something!”

One fan, Melea Johnson, who was attending the game with her children, received a lot of attention after writing on Instagram, “No one working the stadium stopped them at the gate, security guards just stared and let them walk by….no one did anything!”

She continued, “We can’t even go to a family-friendly college football game without our kids & family being exposed to nudity?? And the stadium and security for the event won’t step in or escort them out because they’re worried they’ll get sued because of discriminatory laws?? (that’s what they told me!) Are you kidding me?!”

At some point during the game, the university says a female officer asked the women to put on actual shirts, and they complied.

Speaking to KSL NewsRadio, Johnson said, “It looked like a very quick paint job, just haphazardly thrown on. The paint was see-through.”

According to the advocacy group Go Topless, Utah is one of just three states with a law banning women from exposing their bare breasts.

On the flip side, the University of Utah uses images of male fans topless with body paint on their torsos in official branding materials for the business school.

The university said detectives will be following up this week to screen for any potential criminal charges and if the women are Utah students they will be referred to the Dean of Students for other potential discipline.

Many Utes fans took issue with the university’s stance against the topless female fans.

They are just boobs. A body part. No different than ankles or elbows. Men can go shirtless. Why can’t women?

I am against double standards between men and women and I am against society shaming women into covering-up any body part whether shoulders, thighs, ankles or hair. 🤷🏻‍♀️ pic.twitter.com/rHdjuZuiWt

How many men were topless at the same game? The double standard is not cool at all. UofU is supposed to be better then BYU https://t.co/GzRF8BAjcf

In 2019, one Utah woman was arrested for being topless in her own home. She ended up taking a plea deal to avoid potentially having to register as a sex offender.