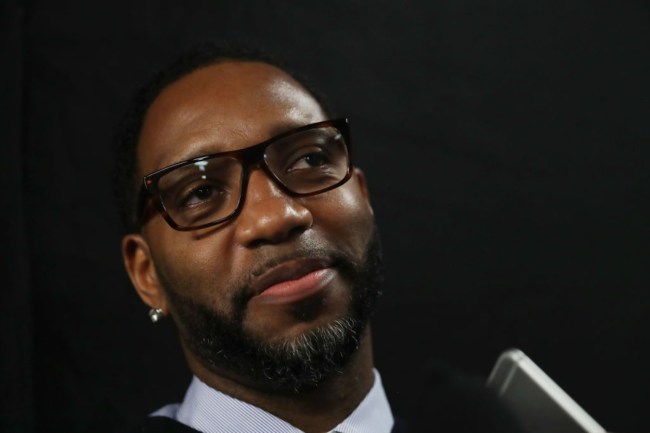 When you think of the best duos in NBA history your mind probably goes to Michael Jordan & Scottie Pippen or LeBron James and Dwayne Wade. You could even throw Kobe Bryant & Shaquille O’Neal in there and make a valid argument, but Tracy McGrady’s mind goes to a different pair of guys, and two that are in today’s NBA.

T-Mac thinks Kevin Durant and Kyrie Irving make up the best duo in NBA history. He went as far as to say that there is “no other dynamic duo that compares to KD and Kyrie.”

That’s an extremely bold statement to make given how many incredibly talented duos there have been over the years, but McGrady stood by his statement.

“I have not seen a pair, a duo that skilled since Mike [Michael Jordan] and Pip [Scottie Pippen]. There is no other dynamic duo that compares to KD and Kyrie,” McGrady said during an episode of ‘Club Shay Shay’ with Shannon Sharpe.

“Even if you look at what LeBron and D-Wade were. Skill-wise they still weren’t touching them two boys. Even if I were to play with Grant Hill I still don’t know.”

"LeBron and D-Wade, skill-wise, are not touching KD and Kyrie." pic.twitter.com/vgqzWBa2VL

There is no debating that Irving and Durant, from overall talent and skillset point of view, make up the most dynamic duo in today’s NBA.

T-Mac will lose some people giving them the nod over MJ and Pippen, but if Durant and Irving can win a few rings together then more people will likely jump on the McGrady-driven KD and Kyrie bandwagon.

Championships are the dividing factor in all of this. Irving and Durant have yet to come close to winning a title together. Until they do that, it’s tough to put them atop the list of the NBA’s best duos of all time.