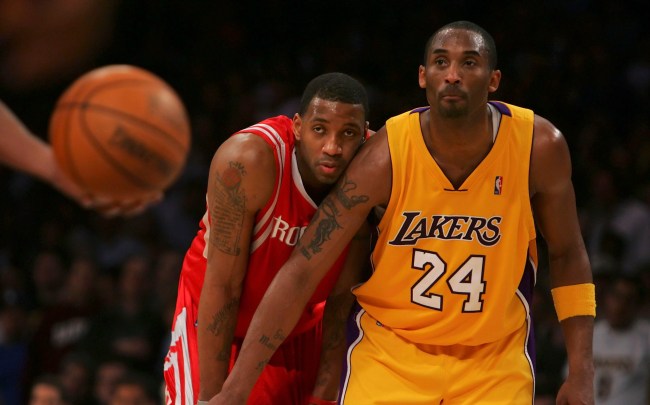 While appearing on Monday afternoon’s episode of The Jump, NBA Hall of Famer Tracy McGrady emotionally told a haunting anecdote about Kobe Bryant once telling him that he wanted to die young.

While appearing on 'The Jump', NBA Hall of Famer Tracy McGrady said that Kobe Bryant used to tell him that he wanted to "die young".

McGrady and Bryant shared a unique bond during their overlapping legendary NBA careers, as Kobe — who was equally known for his defensive prowess as he was for his offensive output — once famously said that T-Mac was the most difficult person he ever had to guard during his 20-year NBA career.

“Tracy McGrady was the single hardest match-up I had in my career, he could just do about everything on offense,” Bryant wrote in his book Mamba Mentality. [via ESPN]

Bryant passed away in a helicopter accident on Sunday, January 26 at the age of 41-years-old. In addition to the Los Angeles Lakers icon, Bryant’s 13-year-old daughter Gianna Marie was one of the nine victims in the tragic crash.

According to reports, Bryant and his daughter were headed to a youth basketball game when their helicopter went down around 9:52 a.m. PST. At the time of this writing, the cause of the crash has not been determined and the identity of the pilot has not been disclosed.

Drafted with the 13th overall pick by the Charlotte Hornets in the year 1996, Bryant spent all 20 of his NBA seasons with the Los Angeles Lakers and won five NBA titles during that time. He retired in the year 2016 and heroically scored 60 points in his final game.