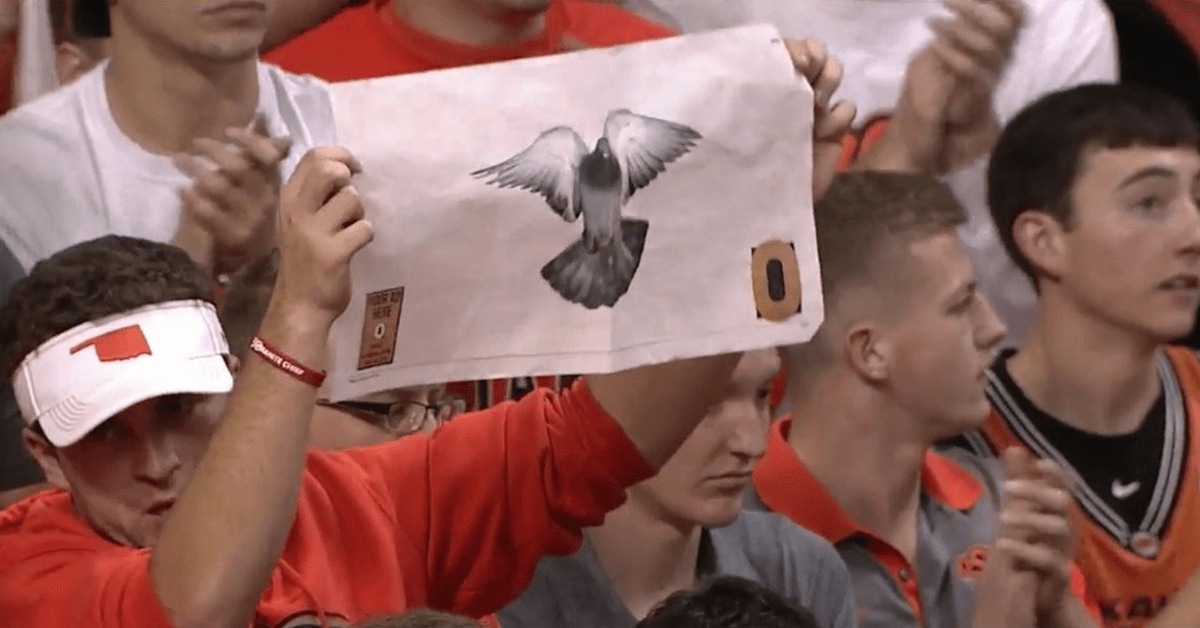 Trae Young, University of Oklahoma’s star point guard, is without a doubt one of the best players in college basketball. The 6-foot-2 All-American is also VERY afraid of birds, which is known as ornithophobia.

“We were in New Zealand and would go to the beaches and all that stuff,” Young said. “You know how birds would be friendly to people? I hate birds. All you see is the ocean, the sand and birds flying over you. The birds trying to eat the crabs in the sand and they’re all next to you. I’ve seen a bird attack one of my friends at my high school in the parking lot. Yeah. It scared her. The bird was by her car, she tried to turn and get in her car but the bird was so scared it just attacked her.”

So today, when the Sooners traveled to Stillwater for the infamous Bedlam rivalry game, Young was greeted with what is likely his personal nightmare: an arena section full of birds.

We’re giving the #okstate student section everything it needs to be rowdy at #Bedlam.
By the way, Trae Young is scared of birds. You can find that and a lot more here: https://t.co/HIQLnAzztE pic.twitter.com/Bo8aUJq6Qt

This is some expert-level trolling by the Cowboys fans. This trolling research and execution is nothing short of impressive.

We see you, #okstate students. pic.twitter.com/jF3oKKkC8Y

While Young posted 14-points in the first half, he actually went 4-15 with an unexpectedly awful 2-8 from behind the arc.

Trae Young had 14 points in the first half, but shot just 4-15 from the floor.

Young has shot under 40% from the floor in 3 of the Sooners previous 4 games entering today. pic.twitter.com/farlkgRCND

However, that didn’t last… Young came out HOT in the second half – draining this longbomb:

It did NOT get any easier for OK State fans from there, Young has since gone off… leading the Sooners into overtime and posting a career high48-points.

Trae Young with the swish and shush 👌 pic.twitter.com/F5ZuL0LdZl

Ultimately, Young couldn’t carry the Sooners to victory as the Cowboys pulled off the upset in Bedlam.

OK State takes down No. 4 Oklahoma 83-81 despite career-high 48 points from Trae Young 👀 pic.twitter.com/ToLKD0rU3M