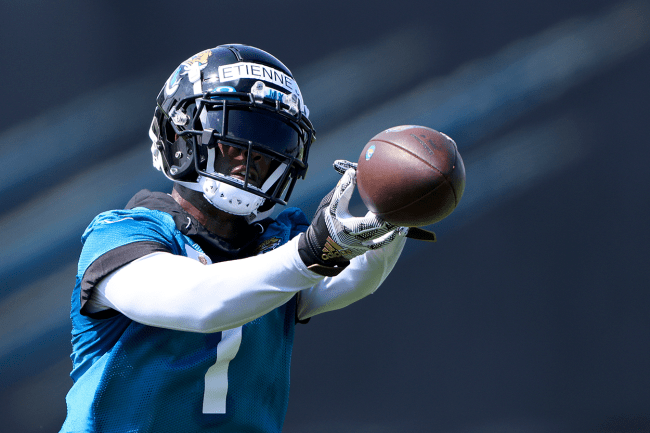 Travis Etienne is the most talented rookie in the 2021 NFL Draft class that people have forgotten about, at least to some extent. The former Clemson running back went No. 25 in the same draft as his current and former quarterback Trevor Lawrence but did not play a single down during his rookie season.

Etienne, who stands 5-foot-10, 215 pounds, was a two-time ACC Player of the Year and a two-time consensus All-American with the Tigers. As a result, he went in the first round and signed a rookie contract worth $12.9 million.

However, in Jacksonville’s second preseason game, Etienne went down with a Lisfranc injury and was expected to miss significant time. Not long thereafter, he was ruled out for the year and missed the entire season.

Now, as 2022 quickly approached, Etienne is back at full strength. He has said so and his head coach Doug Pederson has said he’s at 100% in regard to what he can do during training camp.

In turn, Etienne has high hopes for the fall. And he wants to be more than a running back. He wants to do it all, much like San Francisco wide receiver Deebo Samuel who played a position he called ‘Wideback’ in 2021.

During practice on Tuesday, Etienne was mostly working with the wide receiver group. He was catching a lot of passes and spending little time with the running backs.

That has been the case all camp and Travis Etienne has been playing a lot of receiver.

Last throw before they blew the horn and went inside.

Over the course of Etienne’s career at Clemson, he caught 102 passes for 1,155 yards and eight touchdowns. He wants to continue to be used in that role in the NFL.

While speaking with reporters on Wednesday, Etienne said that “if [he] could be like Deebo Samuel, [he] would love that.” That means that he wants to do it all for the Jaguars and it will be interesting to see how Pederson uses him in the offense— especially considering that Etienne quarterback and he have an already-established, championship-winning connection. Stay tuned!