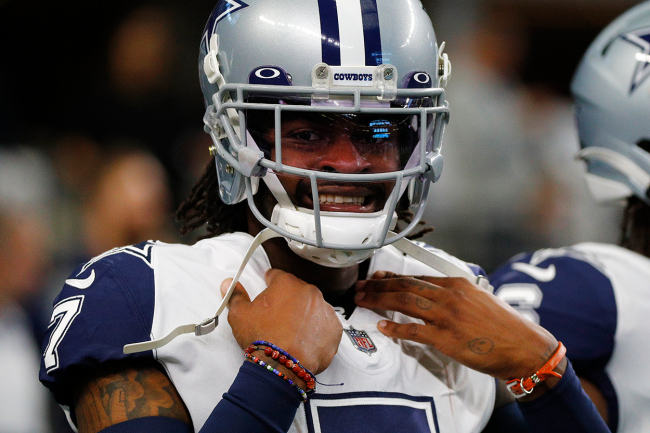 There are a lot of people who like to hate on Trevon Diggs. That is no exception after snippets from his rough afternoon at Cowboys camp on Thursday.

Diggs, entering his third year in the NFL after being drafted by Dallas in the second round of the 2020 draft, got torched. Twice. On back-to-back plays.

During the 1-on-1 portion of practice, Diggs lined up first against Simi Fehoko, a former fifth-round pick out of Stanford. The team is excited about Fehoko’s potential, and 1-on-1 coverage drills favor the offensive pass-catcher, but there is no reason that Diggs should have locked him up. Or, at the very least, stuck with Fehoko and forced him to make a play.

That did not happen at all. Diggs never stood a chance and Fekoho scored on the deep ball with ease.

Look, it happens. People get beat, feet get tripped up and tangled, a receiver gets a really good jump — it happens.

When it does, it’s all about how the cornerback recovers and responds on the next play. Diggs did not respond well.

On the very next rep, against star receiver CeeDee Lamb, the former Alabama defensive back got beat again. Lamb left him in the dust and scored with ease on a go-route.

As soon as the videos made their rounds across the internet, people immediately began with the slander.

Trevon Diggs getting torched by Simi Fehoko (who?) 😭 this y’all elite corner? pic.twitter.com/zx9CmaAldN

Can’t wait to watch Kadarius Toney cook Trevon Diggs this year, bro put him through the spin cycle as a rookie.

Trevon Diggs after he lets a 3rd string WR torch him, but the QB overthrows the pass: pic.twitter.com/dFWo4jp3A7

Trevon Diggs really out here getting cooked by Simi Fehoko and some ppl wanna call him a top tier corner because he got a few picks https://t.co/IWgFCckE1d

Diggs will likely be just fine, but Thursday was not a great showing for the 23-year-old.