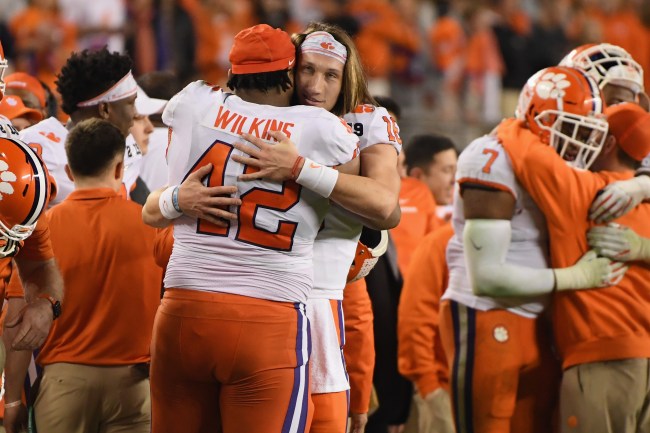 Trevor Lawrence didn’t just do the unthinkable last year by guiding the Clemson Tigers football team to a national title win as a true freshman, but he did so after replacing the incumbent starter, Kelly Bryant, early in the regular season, proving that he’s got some mad skills that needed to be un display. Remember, Bryant led the Tigers to the College Football Playoff the year earlier, so it’s not as if he was some slouch out there.

While Lawrence’s charisma and natural talent was put on display once he took over the starting gig for the Tigers, culminating in a dominant performance against a Nick Saban-led Alabama team in the National Championship Game, it’s still insane to think that this kid has at least two more seasons of college football left. Hell, this time last year, he was just preparing for his high school graduation, now he’s the talk of college football. Just insane.

Is Trevor Lawrence really just that much better than his peers, or is there something else that helps separate him from other players? If you ask his former Clemson teammate, defensive tackle Christian Wilkins, it’s Lawrence’s low-key and laid-back personality that’s the difference. Here’s what Wilkins had to tell Jim Rome about Lawrence’s almost stoic demeanor.

That’s some pretty high praise for Trevor Lawrence from Wilkins, who was one of the leaders the past few years on the Clemson defense, and was a veteran presence in the locker room. To paraphrase Wilkins’ admiration for Lawrence, take a look below, via FTW.USAToday.

“He’s as cool as he can be, and I feel like that’s just a testament to — there’s a reason he’s been so successful already in his time just because he’s so nonchalant, just so laid back, so cool, just wants to play the game, just loves the game. (He’s) always appreciative of his opportunities, but he’s just a cool customer.

“There’s people in life who are low maintenance or high maintenance, he’s really like no maintenance. He’s just like, ‘Yeah, whatever.’ He just does his job, shows up, does everything you ask, and he’s a special kid, off the field and just on the field too. You can see that arm — the way he can sling it, the way he can throw it around. That special talent speaks for itself.”

There are plenty of talented players in college football, all of which made it to that level because of a combination of different factors. But the fact that Wilkins thinks Trevor Lawrence’s “no maintenance” personality is what helped him handle the enormous pressure of taking a national title-contending team and successfully win the whole thing, shows that he’s cut from a different kind of cloth, which should be scary for the rest of college football. If Lawrence did that at his age and as a true freshman, what could possibly rattle him during his remaining time at Clemson?