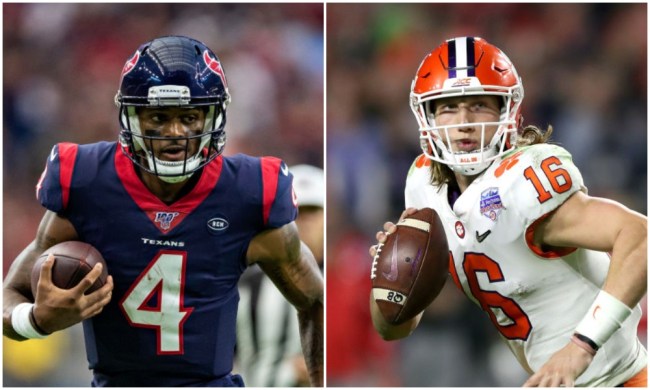 Dabo Swinney and the Clemson Tigers have done pretty well in the quarterback department over the last handful of years. Going from a two-time Heisman Trophy winner and first-round pick in Deshaun Watson to one of the most dominant college quarterbacks of all time in Trevor Lawrence, there is no denying that Clemson fans have been spoiled. We also can’t forget Kelly Bryant was dominant as well before transferring.

With Lawrence taking over the program from such a talented quarterback like Watson the two get compared to one another quite often. While Watson’s fate in the NFL was a bit more up in the air being selected 12th overall in 2017 by the Texans, Lawrence will more than likely be the first-overall pick in the 2020 NFL Draft if he elects to enter the draft early.

There’s a pretty good chance that the Jets will be owners of that first-overall pick so over the past few weeks New York-based reporters have been joining Clemson press conferences asking questions about Lawrence. Clemson also plays Syracuse this weekend, so the New York ties are alive and well this week.

During his weekly press conference, Swinney was asked to compare Watson and Lawrence to one another. For Swinney, there are many more similarities between the two quarterbacks than differences with the only outlier being Lawerence’s height advantage.

“Oh man, we’re popular in New York these days,” Swinney said, according to 247 Sports. “They’re more similar than they are different, that’s the best answer I can give you. They’re similar in every regard with the exception of Trevor being 6-foot-6. Deshaun is not that. He’s probably 6-3, maybe not quite 6-3. They can both make every throw. Trevor might have a bigger arm, but you’re splitting hairs. They’re both creative. They’re both great leaders. They carry themselves with a great, humble spirit.

“The only difference between those two guys is Trevor is just bigger. Trevor does not get the credit for his athleticism. There’s nothing Deshaun does athletically that Trevor cannot do. You saw that in the bowl game last year when he took a draw against a great football team 50-plus yards. He can run. Both can run. Trevor has long hair and Deshaun has short hair.”

Watson finished his 38-game career at Clemson with 10,168 passing yards and 116 total touchdowns with 90 of those coming through the air. Lawrence is 35 games into his college career and has 8,489 passing yards, 81 passing touchdowns, and 14 scores on the ground.