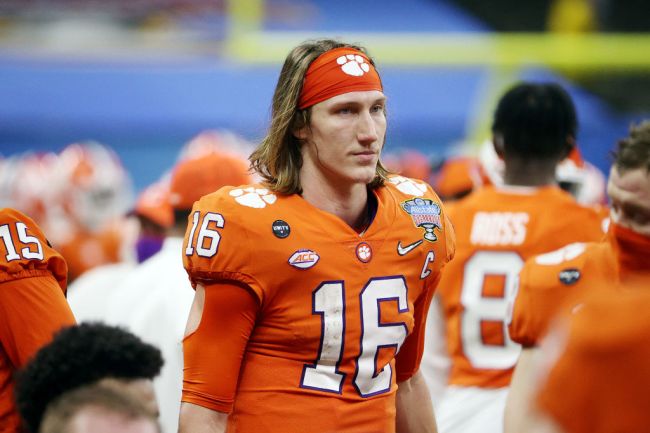 Trevor Lawrence is headed to the Jaguars with the No. 1 overall pick in this month’s NFL Draft and he doesn’t want you to get it twisted. The former Clemson gunslinger and his father made some comments last week that raised some eyebrows and took to Twitter on Saturday to set the record straight.

On Wednesday, Sports Illustrated released Michael Rosenberg’s cover story on Lawrence which discussed his relationship with football at length and caused quite the stir. In the piece, the 21-year-old talks about wanting to be the best player he can be on the field, but believes that trying to prove people wrong is “unhealthy.”

SI Cover Story: @Trevorlawrencee is out to prove absolutely nothing

“I’m passionate about what I do and it’s really important to me, but I don’t have this chip on my shoulder. I can’t manufacture that. I don’t want to.” https://t.co/OzQzoe5uIn pic.twitter.com/VfjDEdACnw

In one part of the interview he said, “I don’t have this huge chip on my shoulder, that everyone’s out to get me and I’m trying to prove everybody wrong,” which is actually a very stable approach to superstardom and becoming a professional athlete. There is a lot of scrutiny and “haters” that come with the role and Lawrence is not worried about them, but worried about himself and what he can control instead.

Later in the article, his father made a comment that caused many NFL fans’ brains to break, saying that “he’s not award-driven. He’s not, ‘I want to win a Super Bowl at all costs.'” Lawrence’s high school coach also added that he could “walk away from football tomorrow and be fine.”

Rosenberg’s interview was actually quite refreshing, but the comments, of course, caused the internet to explode. Some people wondered what the reaction would be like if Justin Fields had said something similar— which is a very fair and illuminating train of thought. However, fans also began to question his work ethic and desire to win— which is just ridiculous.

Lawrence saw the scrutiny and decided to address it directly.

It seems as if people are misreading my sentiment.

I am internally motivated – I love football as much or more than anyone. It is a HUGE priority in my life, obviously. I am driven to be the best I can be, and to maximize my potential. And to WIN. (1/3)

Everything that comes with it. The work, the team, the ups and downs. I am a firm believer in the fact that there is a plan for my life and I’m called to be the best I can be at whatever I am doing.

Thanks for coming to my TedTalk lol. 🙌🏼

It’s pretty absurd to question a quarterback who lost his first career game in the National Championship as a sophomore and went back to the title game as a junior, but that’s the world we live in. Lawrence will be just fine.