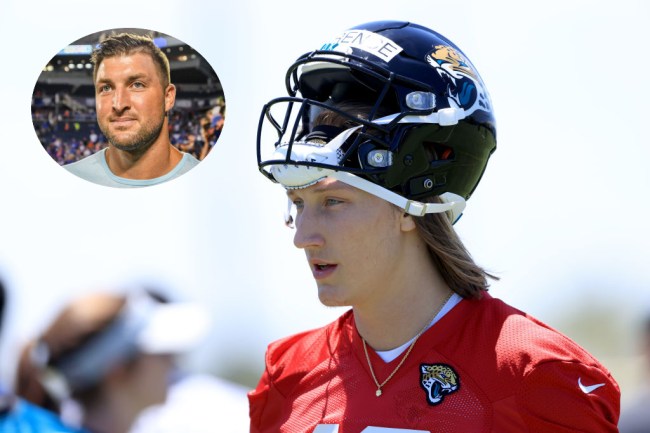 Everyone, not just football fans, has offered up their opinion about the Jacksonville Jaguars signing Tim Tebow as a tight end on a one-year deal. At the end of the day, however, the only people’s opinions who really matter about the surprise signing are the people signing his paychecks and his teammates, particularly his quarterback, Trevor Lawrence.

The No. 1 overall pick from this year’s NFL Draft certainly seems excited about getting to work with Tebow. Lawrence recently joined the AP Pro Football Podcast and had nothing but positive things to say about his new tight end.

“He looks great,” Lawrence said. “He’s just a guy that you want to be around. Character is awesome. Had a few conversations with him and I can already tell, and [he’s] just a hard worker. No one is going to work harder than him. Those are the kind of guys you want in your locker room and you want to be around every day. And then I’m excited to see what he can do on the field as well. We got in a few days and he looks great. He’s in awesome shape.”

“When it was official, I saw him in the locker room and had a few good conversations and I really like him.” Lawrence continued.

It would be understandable for Lawrence to be frustrated with the Jags bringing in one of the most popular athletes on the planet weeks after he officially became the face of the franchise, but the young quarterback is certainly saying all the right things here.

Who knows, Lawrence may be relieved that Tebow is a part of the organization simply due to the fact that the majority of the spotlight will now be on Tebow and not himself. Lawrence now has the opportunity to go through training camp and even the preseason with fewer eyeballs glued to him.