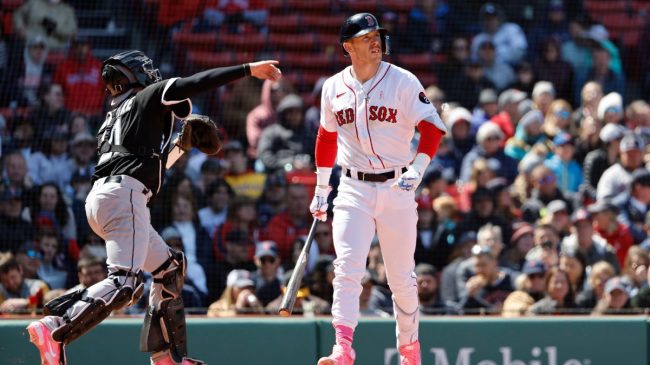 Trevor Story’s debut in Boston is far from what was imagined when the Red Sox signed him to a $140 million deal during the offseason.

The infielder is off to one of the worst starts to his career, hitting a measly .194 through the team’s first 29 games. Story has struck out twice as many times as he’s tallied hits and has been far from the slugger that we saw in Colorado.

Even with the short porch of Fenway’s “Green Monster,” the righty has yet to hit a home run. This coming after blasting 24 or more in five of six professional seasons.

What’s made Story’s start so horrid is his inability to make contact, let alone get on base. He’s swinging and missing at a high rate, failing to put the ball in play to at least give himself a chance.

That was never on display more than in Boston’s most recent series with the White Sox.

Story went 1 for 12 over the three-game slate, striking out six times. Following his final at-bat, it appeared that the Boston faithful had seen enough.

Story stepped up to the plate in the eighth inning with nobody out and the Red Sox trailing 3-2.

He’d strike out on a check swing to complete the hat trick, giving him a trio of K’s on the afternoon. The boo birds quickly followed as the fans have become fed up with his lack of success.

Despite the struggles, he remains near the top of the order, hitting in the two-spot on Sunday.