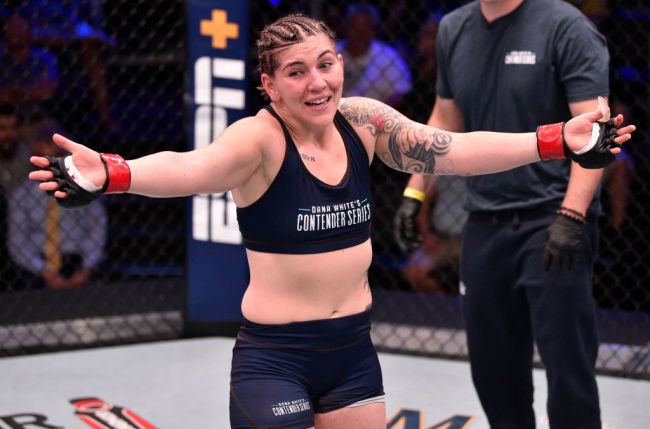 Jake Paul and Triller Fight Club lent a helping hand to a UFC fighter while criticizing the UFC over fighter pay.

On Wednesday, UFC fighter Sarah Alpar launched a GoFundMe in an effort to train full-time saying that all the donations she receives would pay for food, training, living expenses, gym fees, doctor fees and other necessities for her MMA career.

Alpar, a former LFA women’s bantamweight champion who earned a UFC contract after a successful appearance on the Contender Series, said she was embarrassed to ask for help through an online fundraiser. She wanted to achieve her dream without any help from strangers. But as she tried to find sponsors for a fight on Sept. 18 with Erin Blanchfield, she realized how far behind she was financially. If she could get a boost, things might not be so precarious.

“I turned 30, and I don’t know, it was a midlife crisis moment? Who knows what the reason was, but I was like, I need to make this happen,” she said. “I’m not getting any younger. What to I need to do?”

AlpAr’s GoFundMe caught the eye of Jake Paul, who has been critical of the UFC in the past over fighter pay. Paul donated $5k of his own money towards Alper’s GoFundMe and went on to take a shot at the UFC.

SMH… Imagine a rookie in the NBA had to start a GoFundMe to play..

I let Sarah @TOOSWEET_Alpar know she has my support and contribution

It’s my honor and privilege to help fellow fighters in anyway I can🙏🏼https://t.co/XvDHOwoN6Q

Triller Fight Club announced late Wednesday that it had donated $ 25,000 to the GoFundMe and released a statement that criticized the UFC for “not paying her enough to support herself and train.”

Triller Fight Club claims they were the one who donated $25K to Sarah Alpar’s (@TOOSWEET_Alpar) Go Fund Me in which they say “It’s sad to see such talented fighters making less than the UFC ring/round card girls” #UFC pic.twitter.com/nkdfjdcBF5

“We are honored to help Sarah as she continues her march towards becoming a world champion,” “Sarah and many underpaid UFC fighters are starting at a disadvantage when they have to work multiple other jobs while putting their bodies and brains through the most rigorous training one could imagine. It’s sad to see such talented fighters making less than the UFC ring/round card girls.”