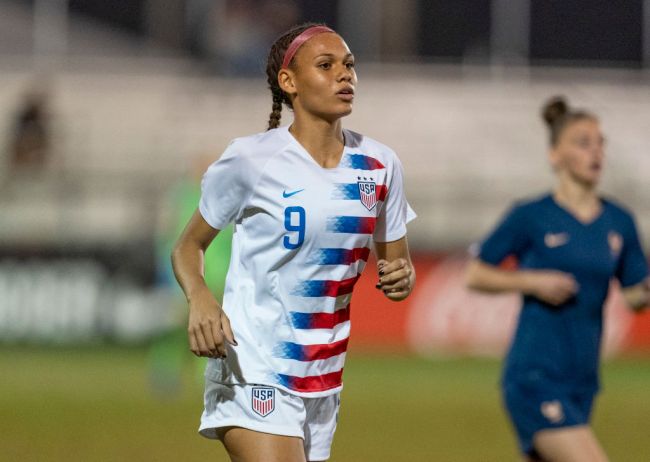 Don’t get it twisted, her name is Trinity. She just so happens to be the daughter of former NBA superstar Dennis Rodman. The 18-year-old soccer phenom has carved out a successful career for herself and is set follow in her father’s footsteps of playing a sport professional. She registered for the National Women’s Soccer League draft earlier this week and will be among the players eligible for selection tonight.

Trinity Rodman is the youngest in the family and was born in 2001 to Dennis and his ex-wife Michelle Moyer. She quickly realized her knack for scoring goals, played her way to becoming the nation’s top recruit in the 2020 class and signed to join her brother D.J. at Washington State. However, due to the ongoing COVID-19 pandemic, the freshman forward was unable to suit up for the Cougars after the season was moved to the spring of 2021.

Prior to her college decision, Rodman was a longtime standout for the United States youth national teams. She has incredible pace and recorded eight goals and six assists in a 2020 CONCACAF under-20 women’s championship last March.

First half hat trick from future @WSUCougarSoccer star Trinity Rodman for the USA U20 WNT against Honduras pic.twitter.com/4XcLv5zKYt

Her speed is unmatched on the U-20 level and she has incredible ball skills that translate to strong finishes in traffic. Look at this nifty move Rodman puts on a defender to lose her in the box before she blasts one past the keeper to the opposite side.

⚽️🔥 What a goal! After a beautiful turn, Trinity Rodman puts in the back of the net and gives @USYNT 🇺🇸 a 6-0 lead over @sedofutbol 🇩🇴. | #CU20W pic.twitter.com/jGXaedeIBm

The NWSL changed its College Draft rules in 2018 to allow players who have not exhausted their four years of college eligibility to register, which allows top talents like Rodman to enter the league without waiting for allocated status from either the U.S. Soccer Federation or Canada Soccer. It makes for an interesting decision amongst collegiate athletes around how to value a degree over pursuing a professional career. The NSWL is becoming a more viable option every year, but its maximum salary is set at $50,000, making it harder to justify putting a scholarship-supported education on hold for a career that is typically over by 35, at best.

USWNT players have been signing bigger contracts overseas as of late, which has taken a hit on the NWSL, but it remains the top professional league in North America and Rodman will be an immediate contributor. She is  expected to be selected in the first round as high as No. 2 overall to either the Washington Spirit or a team that trades up to select the young forward. North Carolina midfielder Brianna Pinto is projected to hear her name called first when the NWSL draft begins at 7:00 p.m. ET. It will be streamed live on Twitch.