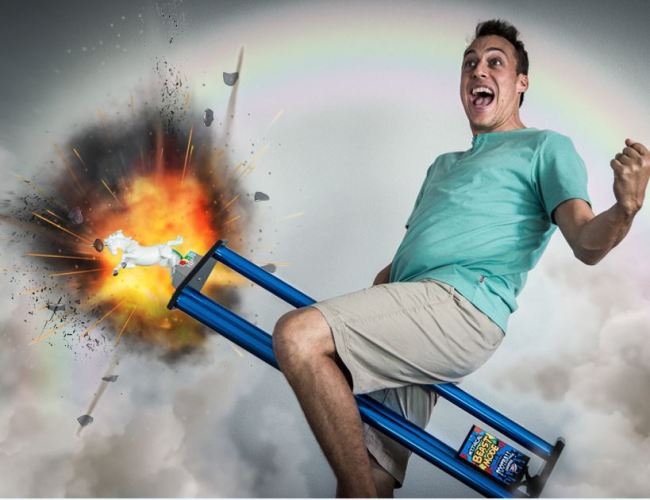 Winning a fantasy football championship feels like a rite of passage for many. For instance, I’ve played in multiple leagues for the past 20 years and have won just one title. That’s pathetic, sure, but it also goes to show why so many fantasy football players go HAM when it comes to celebrating their much-desired victory.

But busting out a cigar and popping champagne is usually reserved for those in locker rooms, which can leave some fantasy football players lost when looking for the right way to party. Fear not, because there’s now a better way to celebrate your championship, TrophySmack, which creates customized trophies specifically designed for fantasy sports enthusiasts.

Look, we’ve all seen some of the over-the-top ways we shame the biggest loser of our fantasy football league, but with TrophySmack, you can take things to a whole new level, either designing a trophy, medal or even a championship ring for the winner, and/or making sure everybody remembers that your buddy Joe forgot his login and never updated his team all season long.

Whatever you and your league decides on, TrophySmack pretty much has you covered — so bring some creativity and let it be known who the champion of the league is. 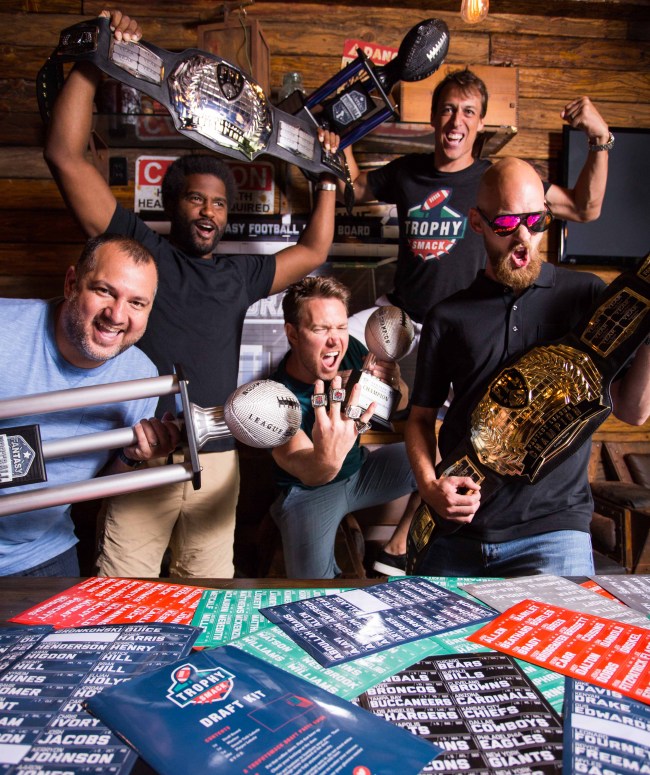 Founded by two buddies in January of 2018, Matt Walsh and Dax Holt, TrophySmack has sort of blown up ever since. Not only did the brand win the Fantasy Sports Trade Association’s Elevator Pitch Competition as an industry outsider, but they also secured over $1 million in sales and, get this, an upcoming appearance on ABC’s Shark Tank.

Since these guys are killin’ the fantasy football scene — and letting champions gloat for as long as they want to — I got the chance to chat with Matt and Dax to see where the idea came from, hear about their fantasy glory (and fails), and what some people have requested for custom trophies.

BroBible (BB): Let’s Start At The Very Beginning: How The Hell Did TrophySmack Get Started?

TrophySmack (TS): Matt: “So it all started when I won this competition during birth… (laughs). Not entirely, but I’ve been hyper-competitive since that day. When I joined Dax’s fantasy football league and made it to the Finals as the new guy, I felt compelled to buy the most obnoxious, in-your-face trophy I could find. I mean, that’s what makes fantasy football so great right? I couldn’t believe it when I discovered nothing like I envisioned existed. And the idea for TrophySmack was born.”

BroBible (BB): You’ve Both Been Successful Entrepreneurs Before, So What Made You Focus On The Fantasy Sports Industry This Time?

TrophySmack (TS): Matt: “While the idea for TrophySmack was fun as hell to think about, committing to creating the business came down to the short-term and long-term opportunities that existed. There are 50 million Americans that play fantasy sports. Short-term opportunity? CHECK. Trophies and awards in general seemed to have avoided digital disruption. If Zappos can create a billion dollar business selling shoes online, then why can’t we bring the business of winning into the 21st century? Long-term opportunity? CHECK! We’re launching non-fantasy championship rings, belts, and awards in time for our Shark Tank episode airing. Think Fathers Day, Groomsmen Gifts, No. 1 Salesperson… anything that deserves to be recognized by epic hardware.”

Dax: “I had just left my job at TMZ. Matt came to me with this awesome idea. I had time on my hands and a garage that was perfect to start a business in. The thing I love most about TrophySmack is that we can make anything. I’m a very creative person and this company lets me create the craziest stuff and make money at the same time. The fact we hand-drew a concept of a unicorn shitting a rainbow with a football stuck on it’s horn, and weeks later it was selling like crazy as a trophy topper, still blows me away.”

BroBible (BB): And Now Y’all Are Being Featured On Shark Tank On January 8th. How Surreal Does That Feel?

TrophySmack (TS): Dax: “It’s completely surreal to be honest. I feel like we’ve been thinking about this moment for so long, imagining what it’s going to be like, going over that day in our heads. I can’t wait to see it unfold. However, I’m not going to lie, there’s a large part of me that is praying we don’t look like complete morons on national TV.”

Matt: “I’ve been an entrepreneur my entire life and have watched Shark Tank since season 1. Getting in the Tank has been an all-time bucket list item for me. Every step of the way I’ve had to ask myself: ‘Wait, is this really happening?’ It’s so surreal. And so awesome.”

BroBible (BB): What Was It Like To Pitch The Sharks?

TrophySmack (TS): Dax: “I remember my heart beating pretty fast before the infamous double doors opened and we got to walk down ‘the hallway.’ But once we were in front of the Sharks, it was just excitement. I’ve had the opportunity to interview a lot of celebrities over the years, so talking to them wasn’t nerve-wracking. I just didn’t want to let my business partner down with a dumb answer or something that could be perceived as a strike against our company. That was my fear.”

Matt: “I blacked out. I’ll be watching it for the first time with everyone else. But really, I’m pretty comfortable in a sales pitch or board room setting. But, damn, was this different. Walking down the halls, the cameras and bright lights, standing in front of the Sharks… I hope they cut out the part where I shit myself.”

BroBible (BB): Any Hints At Whether You Got A Deal Or Not?

Dax: “You’ll have to tune in on January 8th to find out!”

BroBible (BB): I Assume You Both Play Fantasy Sports, So What’s Your Best Finish?

TrophySmack (TS): Dax: “My name is on the trophy. Funny enough, I’m a terrible fantasy player. I honestly suck at it. So I make sure to remind my league as much as possible that my name is on there, because that’s all that really matters. Right Matt? Oh, that’s right, his name isn’t on the trophy.”

Matt: “Yeah… that’s painful for me. I like to joke, now that we own TrophySmack, I’m a subordinate to all champions. While I haven’t won the OG league with Dax yet, last year in my league with high school buddies, I took down the championship during Hanukkah, and, naturally, constructed a custom menorah trophy, coupled with some sweet threads.” 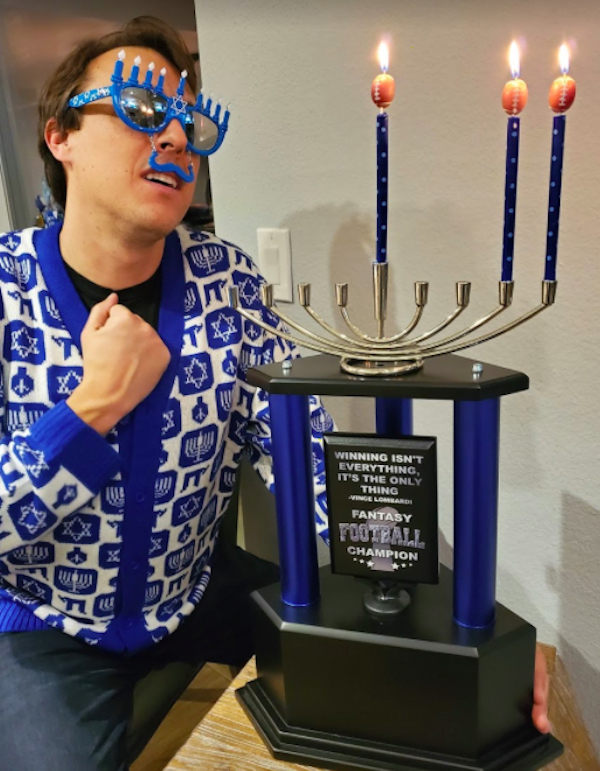 BroBible (BB): Any Hilarious Stories Of Loser Punishment For You Or Somebody In Your Leagues?

TrophySmack (TS): Matt: “Anyone in a league with me is both a blessing and a curse. I’m lining up our newest and most badass custom pieces for the champ… while the league loser has to prototype all our ridiculous loser punishment products. The more pointing and laughing we get, the more inclined we are to put the idea into production. This season we launched an actual ‘Suck Town Hall of Shame’ Toilet Seat with custom vandalism and public restroom vibes. It’s amazing how well it fits around the neck of any league loser.”

Dax: “Our league sticks to shit-talking and constantly reminding the person how bad they suck at fantasy, and how it’s a direct correlation to how bad they suck at life. But I’ve seen some pretty amazing punishments with our loser products. People tag us in photos all the time of their league loser standing next to a busy street holding up our poster that says, ‘I SUCK at fantasy football, HONK to shame me.’ Public humiliation always gives me a good laugh.”

BroBible (BB): Like, Is There Any Line That Can’t Be Crossed When Calling Out The Fantasy Sports Loser?

TrophySmack (TS): Dax: “Absolutely not! That’s what makes fantasy sports so much fun. There’s something about the fantasy culture that makes it all acceptable. Whether it’s a license plate frame or a toilet on your desk letting the world know of your defeat. Basically, if the loser isn’t humiliated in some way, then what’s the point?”

Matt: “As long as actual crimes aren’t being committed, pretty much anything goes.”

BroBible (BB): More Importantly, How Long Can You Gloat When Winning Your League Title?

TrophySmack (TS): Dax: “In my case, forever. Mostly because I know it may never happen again. At least I had my moment once. Unlike Matt.”

Matt: “Listen, Dax, you won before I was in the league. Who wiped your shit stain of a team off the playoff brackets this season? But, yes, Dax is correct. He’s playing his cards well… and I hate it.”

TrophySmack (TS): Dax: “Yes. We started the business by allowing customers to mix and match toppers, column colors and plaque designs. But have since kicked the doors wide open when it comes to customizing. We just launched a designer tool that allows customers to design their own plaques, league plates, rings and soon championship belts as well. We were getting so many requests to add images, logos, phrases and text that we wanted to make it easy and simple for the customer to do themself.”

Matt: “Our designer tool is changing the game. This level of customization has never been done before. Imagine the league champ taking home a WWE-style belt with his mugshot inscribed across the front in full color. This is next level gloating. Another idea that we’re super excited about is launching our custom sculpture line of trophies. We can take someone’s face and turn it into a bobblehead topper on a custom trophy. I can’t wait to see what kind of loser trophies we make.”

TrophySmack (TS): Matt: “We’ve made some pretty ridiculous pieces. I’ll never forget this 60-inch trophy with a custom resin moulded piece for the league champ. We got into the nitty gritty of details… literally. ‘Make the arm pit stains even more yellow and dirty’ was one of our rounds of feedback. The custom sculptures are a ton of work, but getting feedback and pictures from the customer makes it all so worth it.”

Dax: “The day I hand painted the perfect shimmery gold tint on a custom gigantic nut sack that hung from the top of one of our trophies was the day I realized we really were doing God’s work.” 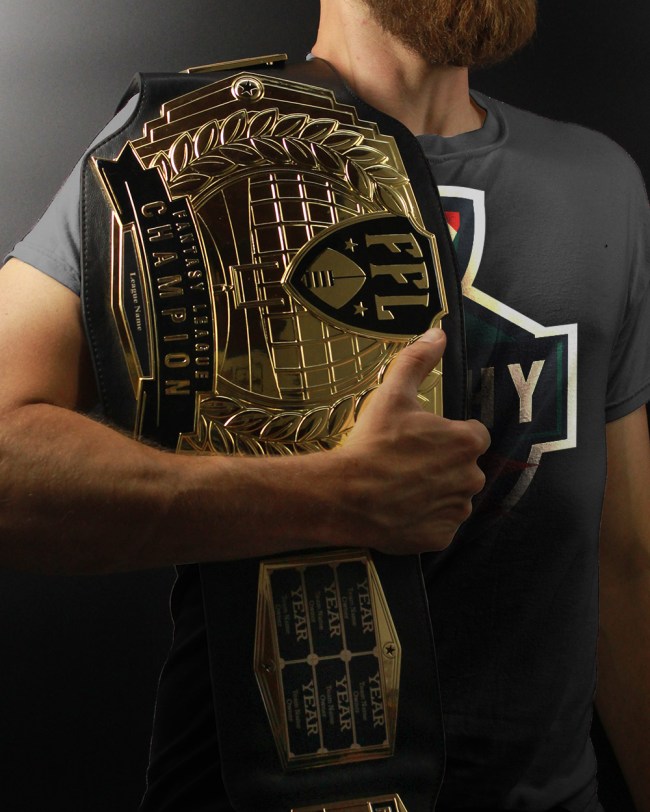