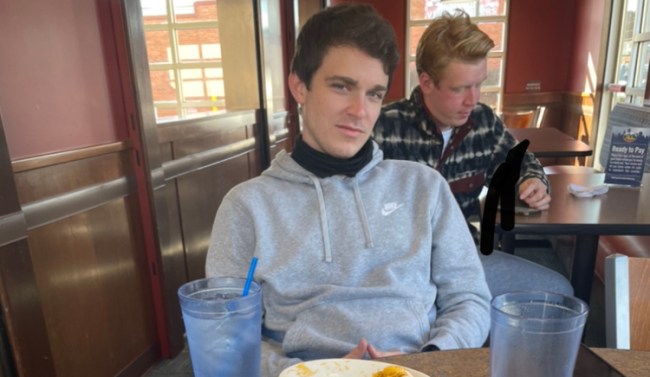 Cincinnati, Ohio native Adam Gardner finished dead last in his fantasy football league this season. As a result, he endured a punishment that makes your stomach hurt just thinking about it. The 24-year-old and his childhood friends created the 10-team “Lunch Table League” as sixth graders and entered their 13th season of competition this fall. They do not take it lightly, donning suits to the yearly in-person draft and competing for a massive trophy that is passed between winners at the conclusion of the final week.

This year, the stakes for finishing in ninth place may have been higher than finishing first. For the last-place finisher, a grueling punishment was to test mental and guttural strength. The loser, Gardner, would spend 24 hours in a Skyline Chili, only able to decrease that time by one hour for every Coney consumed.

If you are unfamiliar with Skyline, it is a midwestern staple that some people swear by and others detest. The chain restaurant serves Cincinnati-style chili that contains only meat, spices and water. No onions, no beans, nothing. You can have the extra ingredients added if you so choose.

Most famously, Skyline serves the “3-way,” its signature dish that features spaghetti covered with chili, topped with a mound of shredded cheddar cheese. A Coney, which Gardner would consume to minimize his punishment, is a specially-made hot dog in a steamed bun with mustard, covered with chili, diced onions and — you guessed it — a mound of shredded cheddar cheese.

Gardner’s team, the Mojo Jojos, finished tied for ninth place but lost the points-for tiebreaker by nearly 100 points. Saints wide receiver Michael Thomas was his first-round pick and played in only seven games, recording less than 500 yards without a touchdown. The lack of production from his top selection was simply too much to overcome. His starting lineup looked like this in the final week:

As an Ole Miss alumnus, Gardner drafted both of the Rebels’ Nasty Wideouts, but couldn’t ride his alma mater to a better finish. The thing is, Gardner is a Skyline enthusiast and once ate at the restaurant 45 times in a span of about 100 days while on summer break from college, so he welcomed the challenge.

Even still, as he began his punishment just after 10:30 a.m. ET and set a goal of 14 Coneys, it was a daunting task. If he were to gorge himself with that many hot dogs, he would be able to leave the restaurant after a long 10 hours.

We have arrived at Oakley @Skyline_Chili for my fantasy football punishment.

I have to spend 24 hours here, and can leave 1 hour earlier for every coney consumed.

The first four Coneys were in his stomach by 12:15 p.m. and his fifth 15 minutes later.

The pace slowed down around lunchtime, but Gardner had seven Coneys and plenty of Tums in his stomach by 2:45 p.m. At 4:00 p.m., it was time for a shift change and the first group of employees gave way to a new cast of (likely confused and equally as supportive) Skyline staff. 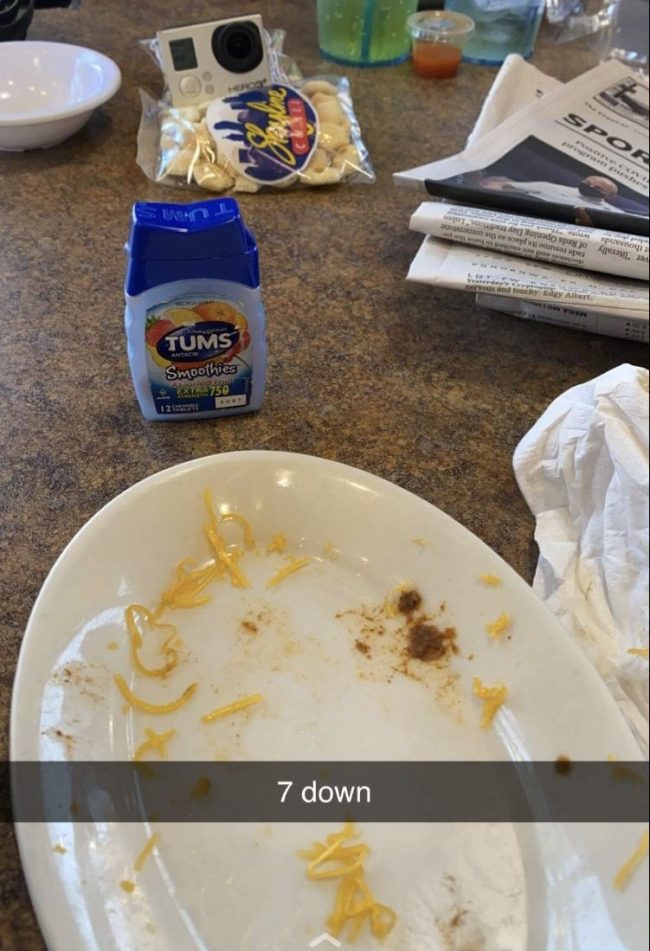 To get the energy up between his seventh and eighth dog, he mixed in a cup of coffee which surely didn’t help his intestines, but gave him a second wind. At 5:45 p.m., the sun had set and 10 Coneys were demolished, setting him on pace to leave at 12:30 a.m. The 11th was served just before 6:30 p.m. and would allow him to complete his day just before midnight. In order to reach his goal, Gardner would need to finish No. 12, 13 and 14 at a dog-an-hour pace to leave before the 12-hour mark. 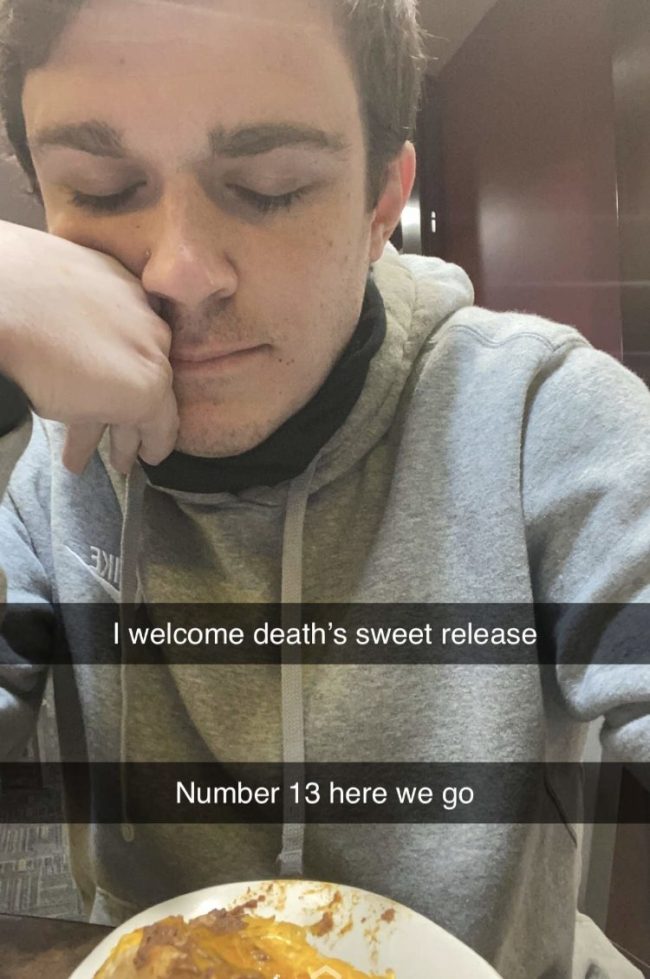 With his friends in attendance (many of them had visited at various times throughout the day), the final Coney was delivered to the table at 8:28 p.m. and was the only thing standing between Gardner and the finish line. It took just under a half an hour for him to force down the last dog, and at 8:55 p.m., just over 10 hours from his arrival, he got in his car and left Skyline Chili. 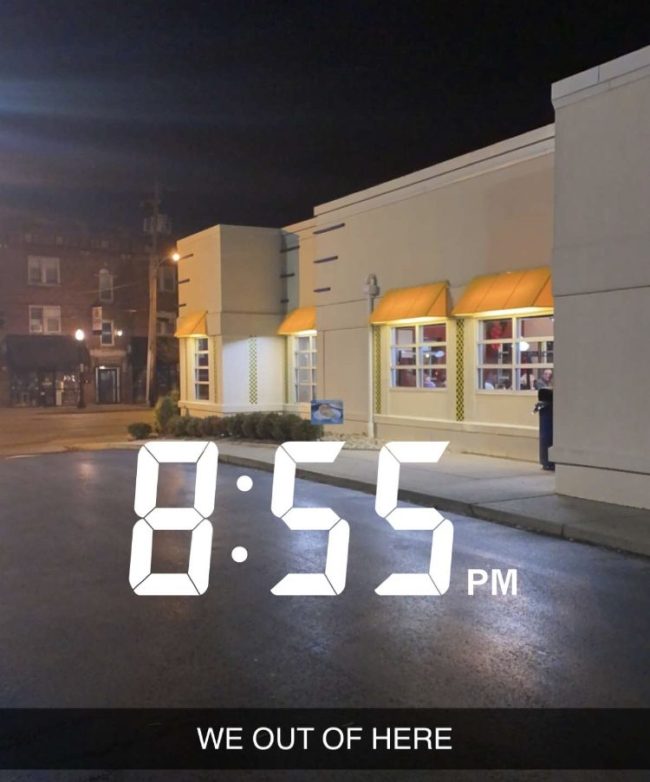 10 hours, 14 Coneys, 4,760 calories, about $45 and one crossword puzzle later, Gardner had completed his fantasy football punishment.

When he was asked how he felt 24 hours later, he said “100% fine, shockingly.” Perhaps his stomach is built of steel, perhaps he has trained his body to handle large amounts of Skyline Chili like a champion. Either way, the timelapse video shows the amount of Coneys he consumed and it looks disconcerting to say the least.

Good for you Adam, you are a better man than most. Maybe now Skyline will sponsor you.