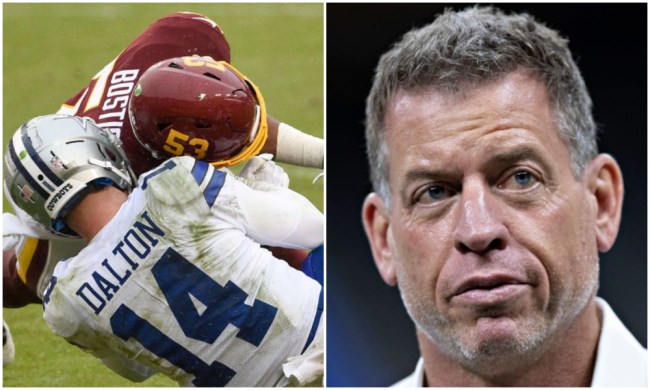 The immediate reaction following Washington linebacker Jon Bostic’s brutal hit on Cowboys’ quarterback Andy Dalton on Sunday was disgust. Everyone, including Washington fans, will tell you that the hit was dirty and that it has no place in the game. After Dalton eventually opened his eyes and the dust settled after the game, the attention went towards the fact that none of Dallas’ players retaliated despite the fact their quarterback was just knocked unconscious.

Cowboys’ head coach Mike McCarthy even appeared to call out his own players for not reacting accordingly toward Bostic after the hit.

Former Dallas quarterback Troy Aikman seems to think that given the facts that Dalton was the team’s backup quarterback and that the offensive line was an oddball group that hasn’t gotten a lot of time together due to all of the injuries along the line, the lack of retaliation was a result of the group being overwhelmed. Aikman defended the offensive line and its non-action during a radio hit on 96.7 The Ticket in Dallas on Tuesday.

“I think that if this offensive line was the group that we are accustomed to seeing over the years with Travis Frederick and Tyron Smith and Zack Martin, that reaction would have been a lot different,” Aikman explained. “It definitely would have been different as well had it been Dak Prescott. So you go back to how much do these guys truly interact and gotten to know each other? To me, that’s what I kind of got from it. And the reality that these linemen that were playing, they are all pretty young guys. They’re young, green guys trying to figure it out for themselves.”

“What I know happens in our league is somebody makes a big deal about something and then every postgame show sees that and then they jump on it and they react to it. I think it was an overreaction to not much. I don’t question these offensive linemen and whether they want to protect their quarterback or do they have his back and all that.

“I think you got to put it into context just who these guys were, and they’re fighting for their own lives. I think they were more concerned with his well being as opposed to retaliate.”

The Cowboys’ offensive line will get a familiar face in Zach Martin back for their matchup against the Eagles on Sunday, but will likely be forced to start their third-string quarterback Ben DiNucci, who is a 2020 seventh-round draft pick out of James Madison.