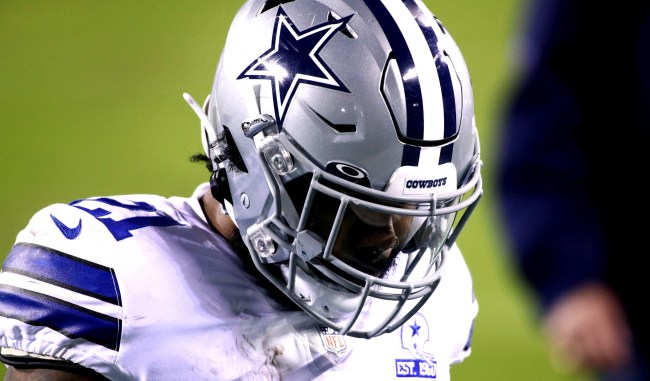 So far 2020 has been a terrible, horrible, no good, very bad year for the Dallas Cowboys. After firing Jason Garrett and hiring Mike McCarthy as the team’s new head coach, there were high hopes for the ‘Boys heading into the season.

Instead, the Cowboys have played horrible defense, seen numerous key players get injured, and been a dysfunctional mess.

Not even Dallas favorite Ezekiel Elliott, who signed a six-year, $90 million contract extension just prior to the 2019 season, has been safe as fans called for him to be traded after fumbling twice in the Cowboys’ 38-10 loss to the Arizona Cardinals (his fourth and fifth fumbles in just six games).

Elliott is currently averaging a career low 65.1 yards rushing per game on a career low 3.9 yards per carry and former Cowboys great Troy Aikman thinks we may have already seen the running back’s best.

During his weekly appearance on “The Musers” on The Ticket, Aikman spoke about the possibility that Elliott, at just age 25, is already on the downside of his career.

“I think it’s probably — it’s an interesting topic because what I find, and I think this has always been the case it seems, anyway, that when a team runs the ball well or a running back has a big day, the running back usually gets most of the credit. When the team is not running the ball well, then the offensive line gets most of the blame. It’s not dispersed evenly whereas at quarterback you get a lot of the credit and a lot of the blame. I think in some ways running backs are little more immune to the criticism when the running game is not working.

“It’s funny because I’ve got the 49ers this Thursday night, and just whether it was Mike Shanahan with the Broncos or Kyle Shanahan now with the 49ers, I don’t want to say that it doesn’t seem to matter, but they’ve not had high draft picks at running back and yet they run the ball exceptionally well. It’s been going on for 25 years, and San Francisco is doing it right now. They’re doing it with an undrafted rookie, who they’ve been able to still run the football with.

“And so, I heard you guys yesterday briefly in the car talking about whether you pay a guy that kind of money on the second contract, and I think a lot of teams would say no, especially in today’s game. I think they might have said no even back when I was playing or they would be hesitant to, and that was a different game as we know.

“Today’s game is obviously more of a passing league and we’ve seen so many teams with lesser players at that position still have success running the football. So it was a huge commitment and then you’re kind of holding on and hoping that he stays healthy, he can remain productive, but then when you get into games like this or seasons like this, when you’re not playing with a lead and you’re not able to continue to run the football.

“I was just looking at some numbers this morning. Dallas on first and second down, runs the ball the second-least amount in the NFL, which I find interesting. I know that there’s games when you get behind, but for the season, to be second on early downs, on running downs, when they have built to run the ball, and that was the commitment they made both in the offensive line and at running back, that surprised me a little bit.

“But yeah, I think that the wear and tear, he’s a physical runner. He runs as hard as anybody that I’ve ever seen, quite honestly, and I think he’s a great finisher and all that. But that begins to take a toll, and it starts to happen about this time.”

Elliott’s career numbers, when all is said and done, are going to be well worth the 4th overall pick Dallas spent on him in the 2016 Draft. He will cross the 6,000 yards rushing plateau this season and has scored 54 touchdowns.

However, he has already had three seasons where he carried the ball more then 300 times and was well on pace for that number when he got suspended in 2017. Throw in 562 carries during his last two years at Ohio State and there is certainly a lot of wear on Elliott’s tires.