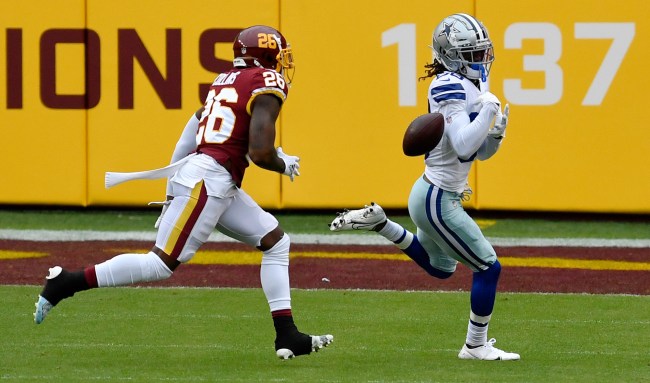 About the only thing in the NFL more entertaining than seeing your favorite team be wildly successful is seeing the New England Patriots and Dallas Cowboys trip over their own dicks en route to a combined 4-9 record to begin the 2020 season. (Assuming you aren’t fans of those two teams, of course.)

Following the Cowboys’ sad 25-3 loss to the Washington Football Team on Sunday – a game in which their backup-turned-starting quarterback got knocked cold and no one on the team seemed to give a damn – Dallas defensive end DeMarcus Lawrence called the team out for having no spine.

“We need more belief and more high spirits around this team,” USA Today reports Lawrence said. “And really, more fight. That’s really, I feel like, one of our weaknesses. We need to build a stronger backbone, fight and also make sure that we brought everything possible to come out with a victory.”

Spears’ comment comes on the heels of a report that said some Cowboys players had zero faith in the coaching staff and claiming they are “totally unprepared.”

That coaching staff is led by first-year Cowboys head coach Mike McCarthy who said following the loss on Sunday, “We talked at halftime about the ‘here-we-go-again’ mode on the sidelines. You know, we’ve got to move past that. That’s part of making progress throughout the season. We need to learn from our mistakes. We can’t keep letting our mistakes hold us down and hold us back.”

However, Monday, during his appearance on 105.3 The Fan, Cowboys vice president Stephen Jones said it’s all good when it comes to coaching.

Stephen Jones not deterred by the Cowboys’ 2-5 start. Via @1053thefan: “I know we’ve got the right head guy for the job. … These things just take time. I know our fans are frustrated. We certainly understand the criticism that’s come our way. But we’ve got to go to work.”

It’s funny Jones would say that, because after the loss, McCarthy told the media, “We need to be much better and we’re running out of time.”

The Cowboys need to start over:@ColinCowherd: Own it. Mike McCarthy was a bad hire. You whiffed, move on. pic.twitter.com/dIiySDXjZP

I have @AZCardinals vs @Seahawks great game on one TV and #WorldSeries2020 game 5 on the other TV. It’s Heaven here on earth. Especially when my @dallascowboys has me in the grave. 🏈🏈